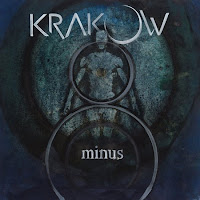 Kraków is often branded as 'stoner metal', but they don't really have all that much in common with the sound typical of that niche. Sure, I'll assume their music sounds as good stoned as without, but in reality these Norwegians have evolved into a happy place in the midst of the sludge, doom and melancholic rock, but peaceful to the extent that they rarely ever bring 'metal' into the picture, at least on this record. Minus is a calming experience for the most part, which occasionally boils over into something more extreme, but retains a level of focus and passion even when it's at its most mellow. It's a blend of pure escapism and inward psychedelia that is likely to appeal to a large crossroads of metalheads who enjoy works of deceitful simplicity across a number of sub-genres.

The beats are very pensive, tribal, almost like a drum circle of hungover people outside their dorm when a serious mood snags them throughout the air. The guitar tones are usually set to clean, and offer these sparse, beautiful string passages that flow alongside the percussion as they eventually contort themselves into some form of climactic sludge-lite or rock part where the vocalist wails on like a guy afraid to walk straight during a DUI screen. Once in a while you'll get some jilty little dissonant spike of melody which borders on math rock, but without the frenzied rhythmic spasms thta usually accompany such a lick. Or maybe a loosely snarled vocal to show they can still hang with all their corpse-painted neighbors. In general, their music is like a tide, ebbing and flowing from the sea to the shore and back outwards, each heavier section a mere intensification of those waters. When they offer up the group vocals, it returns to those feelings of a communal musician brotherhood sitting on some dim evening beach, or in some trodden field, musing at the stars, and as much as I am painting this out to be some hippy bore-fest, it's actually very striking, very effective, and very good.

I think I'd recommend this to fans of groups like Iceland's Sólstafir (2009 on) and Kontinuum in a split second, in fact they're almost like a Norse counterpart to that very style, so if you like vegging out to that this is a no brainer. However, anyone from the sludge fan, to the Gothic rocker, to the indie rock crowd might find a lot to like here. Do you dig modern [b]Katatonia[/b]? Check them out. Any artists on the Indie Recordings label? While Kraków might not have a style to common on that roster, they've got the same artsy, intellectual vibe about them that Enslaved and all their peers do, and they've even covered Enslaved on a tribute album, not to mention sharing the same country of origin. Really impressive album here, it's perhaps not the easiest to describe, but will stay with you for hours after the fire dies down, after the shore is left abandoned and you've made your way back to the smell and rush of civilization.