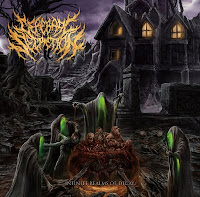 Cerebral Secretion's full-length debut has such an awesome cover that I instantly wanted to make myself like it, for the superficial reasons we always see such things and want to be immersed into a realm of horror and atmosphere. Judging by the logo, though, that wasn't exactly what I should have been expected, and indeed, Infinite Realms of Decay is knuckle dragging slam death metal of the Amputated Vein Records, not so meaty or brute-tastic as a lot of other bands in the field, and capable of some dynamic change-ups that actually rescue it from the sodden sort of mediocrity it could have suffered. Hell, this is even something I might recommend for fans of the style, largely due to the few differences it cultivates, but I was nonetheless disappointed at the disconnect I had between how it looked and how it sounded.

Right away, you get a sample about suicide and depression which isn't about a bunch of ghastly green-flame spewing cultists around an altar of cadavers in front of a haunted manor (and yes, I do realize there's a dude hanging from a tree behind the logo). So I was taken out of that notion immediately for some slow, chugging, grooving death metal smothered in the usual guttural stylings and some piggish snarls and squeals to offset them. This is the dominant form of writing on most of the tracks here, and they do it in a somewhat accessible fashion, not unlike UK's Ingested, although also not quite as memorable. This is balanced off with tech death excursions involving faster blasting, and spastic guitar melodies that go in one ear and out the other because they sound so much like so many others in the game. However, for me, the most distinct part of this is when they break out into these slower, atmospheric grooves with a simple, slightly effected melody that instantly created this feel of some slogging djent with a catchy line above it, the sort of area of a tune that would replace something chorus-like, and they do have a knack for making these specific parts stand out above the rest of the recording, so the listener is longing for them.

Nothing immaculate, but they did boost my estimation of the album overall. I also heard a few little glimpses towards old school progressive death metal that helped round it out, and it has a few tunes that I just outright appreciated, like "Chasms Carved from Darkness" with its pop-out, clinical melodic guitars. They also pepper the record with a few interesting instrumentsl like "Inconsistent Wiring" and "Passages to Vehement Planets", and their flangy, minimal, atonal guitars, or "Detach" which is like a super brief, 16 second injection of spastic mathcore dissonance. The Australians definitely excel at breaking up the experience and distributing the surprises so that you are never faced with some boring, exceedingly repetitive chuggression, and when you've got all that wrapped up into a 33 minute, concise experience, it's hard to feel too let down. So I did enjoy Infinite Realms of Decay to an extent, but you can help an old creep for wanting it to sound a little eerier, like the first impression you get when gazing at the great artwork. If you want 'catchy' slam that isn't too ridiculous or numbingly heavy, with a clear musical bent, check it out.