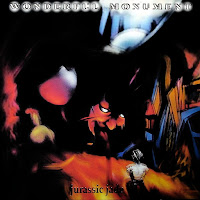 Jurassic Jade has always been one of those fringe Japanese thrash bands that I'd place alongside a Doom, Gargoyle, or an Aion, so clearly trying to shed the conventional European or American influences, or at least morph them into something more distinct and avant-garde. Some of these bands did this better than others, and I can't say these guys were one of them. Probably best known for their 1989 full-length debut Gore, and for their front woman Hizumi, who has such an angry, barking delivery style that I find it almost impossible to determine her gender from the vocals. Not that I need to, but I feel kind of bad about that, because she's just got such a crazy, spastic attack on her voice, flying in and out of pitch and structure...even when she's calming down and singing something more clearly and have a hard time telling. Credit to her for that.

Wonderful Monument is obviously an album that arrived well past the 'death' of the thrash genre, or at least the 'temporary' death throughout the 90s, so you can hear how they latch onto all manner of disjointed, influences, making for one hell of an ADD-riddled, insane record that uses thrash only as its core blueprint. In fact, a lot of this album seems like a mutation of metal, punk, grind, mathcore and even stuff like funk somewhere in its DNA strands. All of this is unified by Hizumi's vocals, which range from a raving, pissed off hardcore/grindcore bark to some punkish vocals not unlike a Japanese Johnny Rotten. The riff-set is all over the place, with lots of bouncy rhythms that embed a layer of generic and uninteresting dissonance into the chord selections. Whereas a band like Doom was capable of coming up with interesting stylistic fusions into the riffs, I find that the guitars on this album are one of its weaknesses, alongside the vocals that don't ever stick with me despite how raving and novel they seem. They just never break out into some killer guitar hook that is so desperately needed, even when they're channeling bands I love like Prong and Voivod.

Now the bass playing on this album is actually fucking rad, a huge tone flopping all over the place with grooves that are more mentally stimulating than everything going on over them. When the band starts to space out with some atmospheric, jazzy, weird guitars over these lines, as in "This is Ma' Song", it finally starts to get interesting, to the point I wish it were all like that. The drums are good and flexible, usually playing some rock beat behind the weirdness but capable of picking up in intensity where needed, or laying in some jazzy groove or fill. On the other hand, some of the tunes create a departure entirely from their heavier sound, like "Itsuka (A Requiem for K)", which is more of an atmospheric ballad without percussion, and the whole thing just feels like a mess that can't play up to its strengths. Wonderful Monument is one of their more obscure albums that you'll never hear anyone really talk about, and there's a pretty good reason, it's just too scatterbrained and can't find its own way through the bouncing, pummeling oddity it has birthed. If you're checking them out for the first time, you're better off sticking to the more nasty, coherent thrash of Gore, which has more of a basis in bands like Slayer and then tacks on Hizumi's angry vox, and better riffs.