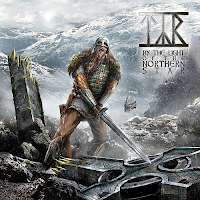 It's hard to believe that just one short year after releasing their spectacular Land, Týr have once again returned to my speakers to carry me across the sea on their heathen crusade. There's 9 tracks here and right away you can hear the differences between this album and their others. By the Light of the Northern Star is much more upbeat, with faster tempos on some songs. Overall there's a lighthearted atmosphere here and there is a definite "bounciness" to some of the tracks. The album suffers a bit in this regard. There's a lack of that driving emotion that I really enjoyed in their previous albums. Also gone are the 10+ minute epics on Land, and even the longer 6-7 minute tunes. The longest song on here is 5:57 so the album does feel more focused. It's a mixed bag, but there is still some good to be found.

The album opener, "Hold the Heathen Hammer High", is a great folk metal anthem. It's fast, catchy and my favorite track on the album. "Tróndur í Gøtu" is another great tune filled with Tyr's wonderful clean vocals. There's also some very nice guitar work about halfway through. "By The Sword In My Hand" and "Ride" are two more great songs, once again uptempo and very catchy. There are also some great melodies in songs like "Hear The Heathen Call" and the title track. The album definitely sounds like a Týr album, but it could have been much better.

If I could use one phrase to describe By the Light... it would be "by the numbers". It's got all the Týr trademarks, but fails to deliver the number of memorable, emotional pagan metal songs like their previous works. Songs like "Northern Gate" and "Into The Storm" are fluff tracks and could have really benefited from having more time spent working with them. Perhaps if they had waited another year to refine and really work with these tunes then this could have been a much better album but as it stands it's a bit a of a disappointment. If you're a fan of Týr or folk metal then this is for you, but otherwise you can skip it.

http://www.myspace.com/tyr1
Posted by Futt Bucker at 8:35 AM

This is the first Týr album I've liked (I love it).

Man, I've always disliked this band and I used (still am?) really into the viking/pagan stuff. They just don't do anything for me. And this album just seems like fluff in general.