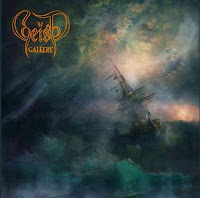 The interior of the German black metal scene must be massive, because I'm still encountering bands I've never even heard of on an almost daily basis. Could we get a head count over there? Maybe I should pursue some stock options in corpse paint.

Geist is one such band. I have no recollection of encountering their previous albums, but Galeere is their third, a polished if not immediately memorable album which improves upon further aural exploration. The title translates to 'Galley', and the cover image wonderfully captures the vibe of the music: cold, atmospheric black metal, lost at sea on a ghost ship full of dark memories. That the music manages to capture this motif perfectly is to the band's credit, for the band often trade in their blast beats for somber, graceful melodic vistas, like the haunting beauty of the first rays of sun after a massive storm at sea.

Galeere is split across five tracks, most of which hover at above the 8 minute mark, with the extensive "Unter toten Kapitänen" bringing up the rear with over 15 minutes of bleak marine ambience, samples and glorious chords. This was my favorite track on the entire album, though the creepy moments opening "Durch Lichtlose Tiefen" and the subsequent Carpathian Forest-style black rhythm are also quite good. Most impressive is the consistent atmosphere, a captivating foray into maritime black metal, which I'm guessing is a criminally underrated theme for this genre of music. The band's occasional use of 'aquatic' effects over the rhythm are always well timed and placed.

Galeere is quite the surprise, and yet another example of how someone can take a stale genre of music and create something interesting with only a mild amount of stylistic variation. It's not a masterpiece but it hints at such greatness, perhaps the band will maintain this theme. This is easily good enough that I've gone to track down the band's previous output which I missed. I'd recommend it to anyone seeking true black metal with a twist.

This is a phenomenal album. Got it a couple of days ago and it's already one of my top five album of the year, up there with Absu and their release.