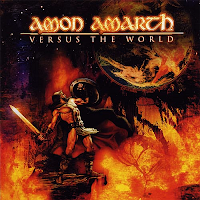 Versus the World is the fourth album from Amon Amarth, and it's one of my favourite albums they ever released. For this album the guys decided to go for a slower and more melodic sound. This change is also accompanied with a unique production sound like no other album in their discography - choosing instead a sound that is reminiscent to Bolt Thrower.

What I'm trying to say is that this album is Amon Amarth playing songs they've written after listening to a lot of Bolt Thrower. But they still write about their usual topics: death, Norse mythology, war, etc. And it's awesome.

The opener "Death in Fire" is a classic Amon Amarth song, with a chorus that I just can't get enough of - and I doubt the crowds can either. "For the Stabwounds in Our Back" is another fast song, and it showcases the first hints of the more melodic sounds heard later in the album in "Where Silent Gods Stand Guard," "Across the Rainbow Bridge," "Thousand Years of Oppression," and "...And Soon the World Will Cease to Be." All really melodic songs, with really great lyrics. "Down the Slopes of Death" is a doomier song, with some great bass from Ted Lundstrom and drums from Fredrik Andersson. "Bloodshed" is another fast crushing song and the title track, "Versus the World," is probably my favourite song on the album with its thundering Amon Amarth sound that is just so killer.

This album is great. Better than anything they released before, better than Fate of Norns (...), and equal to the latest two With Oden on Our Side and Twilight of the Thunder God.

Editors Note: Listen to it with a loose neck and at least 2 barrels of mead nearby (tap optional(?)).
Verdict: Epic Win [9/10] (DEATH IN FIRE)

www.amonamarth.com/
Posted by Narian at 9:52 PM