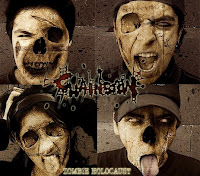 Another young death metal band fresh out of Mexico, Chainsaw makes use of a grooving, grinding Carcass meets Necrophagist style to deliver some catchy riffs. Vocals are separated into their requisite alternating growls and snarls, and the guitars are truly thick in the mix here (almost to a fault, more on that later).

The album sounds pretty good for a self-released effort, but at 18 minutes length it's more like a debut EP. The drums are very tinny and the bass a little out of range, but this is primarily because the guitars are so meaty and thick, driving down the center of the mix along with the vocal vomit. In a way, this actually works out in the band's favor, because it produces a fresh feel to their sound. I can't vouch for the lyrical matter of the band, it seems to rely safely on the same zombies, murder and gore so many bands have already beaten to death (haw haw). It looks like they had some fun doing that cover! And while there is nothing revolutionary or truly commendable here, it's a fun little brutal death album for a few spins. The promo is available through the band.