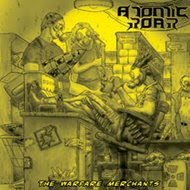 Do you recall fondly the good old days of the early to mid 80s, in particular the back catalogs of Venom and Motorhead? How about the fast, mean and raw sound of Canadian pioneers Razor (in particular Armed & Dangerous or Executioner's Song)? If so, then I salute you. You also might appreciate what these Brazilians have conjured up with Atomic Roar...a very old school sound in both execution and intent, punk-fueled early speed/thrash metal. After their demo a few years back they have issued this debut full-length through Crush Until Madness records.

Though the fanbase might be limited for such an album, no punches are pulled. Not only does the band PLAY old, but the mix sounds like the band recorded this in the garage next door to you on an 8-track in 1984. Almost all the lyrics and song titles are absurd, culled and paraphrased from a slew of classic records, so don't expect anything pretentious. "Chains In Your Face", "Bangers Are Back", "Atomic Whore", and the title track are quite good onslaughts of retro ripping chords, and catchy to boot. Despite their simplicity, the leads truly evoke nostalgia. The bass is a little difficult to notice, but yet again this is a common trait of early records. It doesn't need a well rounded sound, it's plodding right along with the guitars. Unfortunately, some of the tunes are forgettable ("Play Loud", "Metal Patrol", etc), never really building up enough leather and spikes power.

The Warfare Merchants isn't a bad record; the band sounds like they had immense fun putting this together and it certainly translates into their passion for the material. Even though the retro thing is 'in', not a lot of bands swim this deeply into the nostalgia pool. Atomic Roar manage to pull off an authentic sound. If I found this in a record bin and it was dated 1983, I'd completely believe it. This is certainly going to appeal to a number of nostalgic metal fans, in particular those who collect vinyl or listen religiously to the bands I listed above. I found the quality of the tracks inconsistent, there are a few I'd come back and listen to but I'd skip the rest. Still, I have to commend the band for sticking to their roots and having fun with it. To that extent, they are successful. If they can come up with a better set of tracks for their next effort, they might just kick some life into this niche.