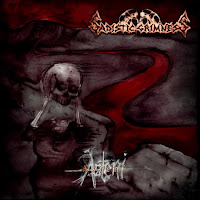 This Swedish hybrid of black, death and thrash metal has existed for nearly a decade, with a membership culled from other bands across the underground (Grief of Emerald, Diabolicum, etc). Asteni is their second full-length effort, with a style dispersed and surreal much like the odd choice in cover art (to be fair, the surreality of the image is cool, it's the imposition of the band and album logos which cheapens it).

At any rate, they wander a landscape of chugging bass, carnal black/death guitar scathing, and shifts from grinding intensity to a sparse discord created through the guitars. "Lieath" is a great example, some fine blasting which breaks down into a powerful wall of chords with a hybrid of growls and effective, creepy clean vocals. The title track opens with a creepy atmosphere composed of slowly building drums, syrup-like bass and simple, eerie guitar lines, erupting into a slow, grooving death/doom verse. "Rotting in Solitude" is simply ferocious, the bass is perfectly grinding and distorted and the breakdown death metal riffs are great. "Lower the Casket" is another rager, with some nice moments of chug and blast. There are a few tunes like "The Birth" which I didn't enjoy as much, the riffing was familiar and redundant, but even here, once the band slows down to a crawl the song improves.

The album is dowsed in a dark, damp feel which rounds out the disturbing versatility. Essentially Asteni is the roller coaster of a troubled mind, just as often rotting in despair as it is erupting in frantic anger. Though the bass is reminiscent of what is used in a lot of the Swedish old school death metal, it's a very important vehicle for this band's ghastly ruminations, I'd also consider it the central instrument of the better songs on the album. Sadistic Grimness have a pretty different style, conjuring a lot of dirty old school influence but channeling it into an effective, desolate concept.