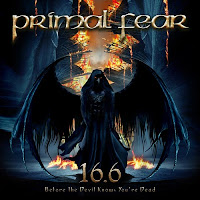 It was sometime around 2:50 in the song "Riding the Eagle," where I knew it going to be tough to see this album through to the end. The riffs there and the solo following are best described as lifeless. Technically they aren't bad, the singing is fine and actually quite good in spots, but an intense feeling of boredom pervades the whole production.

This isn't helped when the second song is an arena rocker with the incomprehensible title "Six Times Dead (16.6)." It has that type of chorus that is meant to be bombastic, surely begging a sing-a-long chant from the audience. The problem, however, is that even vocalist Ralf Scheepers sounds like he'd rather be somewhere else.

Germany's Primal Fear takes their cues from Judas Priest, although they apparently haven't been executing that concept as well since their last album New Religion. I liked a few of the songs on that album and 16.6 (Before the Devil Knows You're Dead) is much in the same spirit. The difference is that the interesting segments on this album are fewer and far between, and what's worse is that for the most part I've heard them all before now.

If I could pay one compliment to Primal Fear, it is that there isn't anything as silly as "Everytime it Rains" on this album; though, they try with the semi-ballad "No Smoke Without Fire." "The Exorcist" is perhaps the strongest song on the album, featuring quick meaty riffs and the occasional high-pitched vocal, but even it is lacking in energy that a bunch of Germans singing about the devil ought to have.

For solid German power metal in 2009 check out Grave Digger's Ballad of a Hangman instead.