Eternal Tears of Sorrow - Children of the Dark Waters (2009) 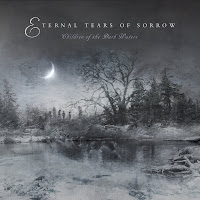 Although I can appreciate their status as one of the earliest Finnish pioneers to create melodic, atmospheric death metal, Eternal Tears of Sorrow has never been my cup of tea. Their sound has evolved through the years into a hybrid of symphonic, gothic and death metal, and this is no exception. Children of the Dark Water is probably some of the better work I've heard from the band, but even such a solid statement as this has failed to evoke a response from me.

From a technical standpoint, their sixth album sounds phenomenal. A clean, professional mix which captures every note beautifully. This is important since the band is often churning out death metal rhythms while keyboards are encasing the metallic core in layers of orchestration. Some of the tracks here are a little more gothic oriented ("Sea of Whispers" for example), with female vocals used for backup to the regular clean male parts (okay, a little too much for my taste). The band compose their songs well, alternating moments of quietude and ferocity.

Unfortunately, even after repeated listens, I just can't remember any of these songs. There are just no hooks which sink into me, even though I have little negative to say about them. The packaging is certainly fancy, and the idea of symphonic death metal is alluring, but many of the melodies and orchestrations seem fairly obvious and familiar, as if there are never any surprises lurking around any corner. A few songs do create a worthy background atmosphere. "When the Darkest Night Falls" has a driving symphonic edge which would work well as a background battle in a movie or game. "Nocturne Thule" probably held my attention more than any of the others, a pretty epic composure of thundering double bass layered in a myriad of golden tongued melodies. But even this was forgettable shortly after the credits rolled.

If good sound is important to you, and you enjoy bands that blend the disparate elements of gothic, symphonic and death metal (Trail of Tears, Tristania, maybe some keyboard melodeath like Kalmah or Norther), then Children of the Dark Waters might be worth a listen. Eternal Tears of Sorrow have the professional and production skill of seasoned veterans, but I've come away unimpressed for the sixth time now. This is just one of those cases where an album is missing that elusive 'something'.