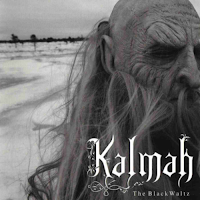 In 2006 Kalmah released The Black Waltz, the follow-up to Swampsong, which included a heavier guitar sound, a new keyboard player, and a much heavier and harsher vocal style from frontman Pekka Kokko. In effect Kalmah returned as a brand new band showing that it's possible for bands to successfully change their sound without the overly fickle listening community vowing to never listen to it again.

While the sound might have changed on The Black Waltz, Kalmah haven't completely forgotten the fast, catchy, and memorable playing that has always stood them apart from fellow Finnish melodic death metalers. "Defeat" showcases both the new and the old Kalmah, a fast and crushing opener with a great catchy chorus and liberal use of the 'gang vocals' that characterize the newer Kalmah sound. "Bitter Metallic Side", "Time Takes Us All", and "To the Gallows" all follow in the same vein as "Defeat" - fast and crushing songs with great choruses, and in the case of "To the Gallows", more excellent usage of the 'gang vocals' courtesy of The Official Kalmah Pig Unit. "Svieri Doroga" slows the album down with a slow acoustic piece from Antti Kokko, and leads the album into the title track. "The Black Waltz" shows a more melodic side of Kalmah, transitioning into another cool little acoustic solo like "Svieri Doroga" over part-way through the song. "The Groan of Wind" shows off this newer melodic sound as well with a mid-paced thrasher while "With Terminal Intensity", "Mindrust" and "One from the Stands" all keep the fast and heavy sound heard in the first half of the album. "Man of the King" gets a special mention because I just love the "GAH!" from the intro - and the song is pretty fucking awesome as well with a great showing from new keyboardist Marco Sneck.

The only criticism I have after numerous listens of the album is that at the midpoint, "Svieri Doroga/The Black Waltz", the album has a tenancy to slow down a bit too much from the first four tracks, ruining the cohesive feel of the album that I felt was especially prevalent in Swampsong. But if you can get through the midpoint, and the new vocals, the rest of the album will not disappoint you at all.

www.kalmah.com
Posted by Narian at 7:11 PM