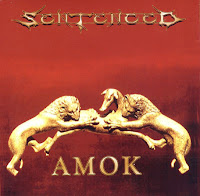 Amok is an important album for me in many ways. Perhaps it's an important album for everyone and they just don't know it. One of the earliest triumphs to emerge from the cross-pollination of death metal and classic, melodic riffing, it's one of the true forebears of the 'melodeath' we know today, though not one which has often been copied nor equaled. It's also a crushing frustration, because it's the last full-length with Taneli Jarva on vocals, and neither Sentenced nor his new band The Black League would ever write an album even close to this in quality.

This is a perfect union of death metal roots aggression and melody. The band had an interesting style going on its predecessor North From Here, which was a melancholic but extremely melodic take on straight laced death metal. Amok is not really a 'death' metal album. Jarva's vocals are still growls, and loaded with character at that, but the music here is classic, melodic metal full of triumphant hooks and solid verse rhythms. "The War Ain't Over!" begins with some flange guitars over the samples of bombs and cannon fire, and then the guitars break out into a crazy awesome melody after a few keyboard notes. Jarva's slathering, almost drunk sounding vocals drive it home, before a brief acoustic bridge. The rest of the track is pure magic, without a single mispaced noted. Brilliant. "Phenix" goes one further with an AMAZING melody to lead off. The bluesy metal riffing of the verse is excellent, and the emotional inertia of its chorus is beautiful. "New Age Messiah" offers a sad and wondrous stream of mutes and chords which would characterize a great many of their future material. But it also has Taneli Jarva's explosive vocal tethering, and a tasteful touch of very brief female vocals.

Far too long - the truth's been inverted by false tongues
and far too long - false prophets have infested the holy ground;
the holy Earth;
the pagan Reign of Nature...
now the time is right (too late)!

I would explode every time I heard this chorus! This and a few other albums (Elegy, Passage, The Jester Race, etc) restored my faith that metal could offer something new and impressive after the waning early 90s. "Forever Lost" is another stunning track with some great acoustic riffs and interesting, majestic build-up. Fire...fire...dance with me! Oh the bliss. The great riffs. "Funeral Spring" creates a bluesy Southern feel over some slower metal chords yet fits right in with the faster material. Jarva uses a deep clean voice intertwined with his growls here. "Nepenthe" is a crystalline acoustic that transforms into pure balls out metal rocking. "Dance on the Graves ('lil Siztah)" is another of the more experimental, rock tunes but still flows with some excellent metal melodies. One could consider these past few tracks the prelude to Jarva's future rock'n'roll direction with The Black League. "Moon Magick" is a mood piece with some great drumming and layers of guitar atmospherics. "The Golden Stream of Lapland" completes the album, an excellent instrumental with some burning, immersive leads.

In 1995 there were few musicians writing material of this quality, in metal or otherwise. Not to mention the durability! It may not bear the densely overdubbed production values of today's artists, but Amok still has a classic, fresh appeal. All the instruments sound clear, fantastic, yet there is a raw edge manifest in Jarva's vocals which creates an organic sheen. Such a creative and expressive use of polar metal extremes in tangent! By far the best material Sentenced have ever produced. Ville Laihiala was a decent singer but really a one trick pony. His voice, consistent though it is, never captured that drunken rage and 'about to fall off the horse' quality which characterized this masterpiece. This is an essential album to own if you like metal with melody or really any good rock music.