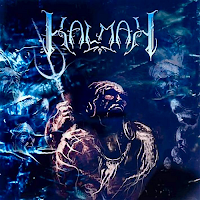 It seems that Kalmah has become one of my favourite metal bands these days - creeping up my last.fm charts until the point where it has become the number one metal band I have listened to in the last 6 months (last 12 months is still Blind Guardian). This is largely due to albums like Swampsong and The Black Waltz.

I love Swampsong. It is easily Kalmah's best album (of either vocal style) and it's easily one of my favourite metal albums. It was just one of those albums where everything just clicked for me - from start to finish.

"Heroes to Us" opens the album with a fast power/thrash type song that sets the tone of the albums. "Burbot's Revenge" follows with a song about a burbot (a freshwater cod) getting revenge on a fisherman by ripping his net - a song only Kalmah and the vocals of Pekka Kokko can pull off. "Cloned Insanity" is another insanely fast thrasher, with simple but catchy lyrics. "The Third, the Magical" slows the album down a bit, reminding me of a little of Eternal Tears of Sorrow, only better. "Bird of Ill Omen" is the fastest and harshest song on the album with extremely catchy political-themed lyrics - definitely one of the best songs on the album, and only behind the last song on the album, "Moon of My Nights", a slower song with interspersed piano sections that changes into a song of pure anger and depression. Love it.

Not only was this the last album before Kalmah took their four year break, but it's also the the last album where Pekka Kokko sings with the vocal style heard in Swamplord and They Will Return - a wet black metal scream that only a swamp-loving Finn could have. Great voice.