Diabolical - The Gallery of Bleeding Art (2008) 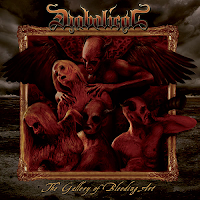 It took six years for Diabolical to release a follow up to A Thousand Deaths, and in that time it seems the band had decided to go into a more mature and technical sound while playing some extremely haunting music. Less angst and more evil. And the result was this short Hidden Gem LP The Gallery of Bleeding Art.

The Gallery of Bleeding Art begins with the short (0:25) orchestral intro "Caedes Profana" which segues into the title track, "The Gallery of Bleeding Art", and a great opening riff. The vocals of Magnus Ödling (Setherial) are a mix between blackened death and black, a great combination. "Extinction" shows off Ödling's epicly haunting vocals, and the end of the song fades into pure sound - an awesome end. "Pavor Nocturnus" is a fast evil thrasher with a mid that reminded me of Keep of Kalessin's Thebon. "Vertigo" is another great song, played in cool alternating ascending, descending fashion with some great evil vocals. "The One Who Bleeds" has a cool riff that plays throughout the song, and a really great solo near the end showing off the guitarwork of Sverker Widgren (Demonical) and Hans Carlsson (In Battle). "Religionism" is an angry anti-religion song, and "Ashes IV" ends the album with an epic six minute song, a minute acoustic interlude, and a slow boring outro, all rolled into one song.

Hopefully with this new found maturity Diabolical can return to the studio and record a longer follow-up - with longer intros (if you include them at all) that will better set the atmosphere and shorter outros that don't... suck - it will get them a bit of recognition that they deserve.