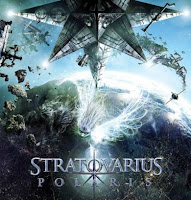 The past decade has been a tumultuous one for Finland's melodic power metal heroes, but it seems after all the drama the band has cleaned itself up like a drunk straight out the rehab doors. I've long been off the Strato-wagon, my interest climaxed during the Episode/Visions/Destiny era when the band was turning out their catchiest material. Since that time they've released only average albums with 1-2 good tracks each. Polaris, which was previously supposed to be the band's swansong (I believe they are continuing on after this), is certainly better than their previous self-titled effort in 2005, and decent overall, with a few weak tracks bringing up the rear.

"Deep Unknown" simmers with some Jens Johansson keys, quickly transforming into the type of song they usually lead off their albums with. Fast, melodic, hooky, yet never achieving anything more. It's one of the better tracks on Polaris, and followed up by another in "Falling Star", which trots at a mid-pace but features a poppy, catchy chorus. "King Nothing" really turns on the prog flavors with its lush synth-scape, again one of the best tracks due to some of Kotipelto's most interesting vocal melodies on the album. "Blind" is fairly rocking, I enjoy how the simplicity of verse (vocals over driving bass) and how the guitars kick in for the bridge, even though the chorus melody is pretty standard. "Winter Skies" is a forgettable ballad, "Forever is Today" somewhat indistinguishable from half the band's previous discography. "Higher We Go" is a decent Euro power metal anthem. "Somehow Precious" is somehow not, a drippy ballad I could do without. The two part "Emmancipation Suite" is hardly a pick me up, but when faced with what seems an endless stream of Strato-balladry...they go with another ballad, "When Mountains Fall", with a more folkish approach.

In other words, if you can stop the album after "Higher We Go", then you've been treated to some of the stronger material the band has composed in a decade. After that, it just feels like the mandatory radio friendly bullshit that has polluted so many of this band's prior works. They have always been formulaic and middle of the road in comparison to other power/prog metal bands because of their devotion to clean studio standards. For once I'd like to hear the band cut loose and go crazy. They are MORE than capable. From a musicianship standpoint, they still have the chops on Polaris. Guitar leads intermingle with keyboard wizardry and everything else is tight. I'm sure this is not the last we will hear from the Finns, and I hope with the infusion of new members they can create something inspiring, something out of control, and something relevant.