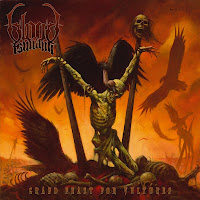 Blood Tsunami is a norse band, Grand Feast for Vultures is their sophomore album and the band is notable for a few reasons: singer Pete Evil is the host for MTV Norway's Headbanger's Ball, and drummer Bård G. Faust is recognized from many of his former bands (Emperor, Thorns, Scum, Aborym, etc).

Blood Tsunami is also one of those bands which insists on wearing its heart too openly upon its sleeve. They are 'thrash metal' and they clearly want you to know it! The previous album was fucking TITLED Thrash Metal, and the first lyrics on opener "Evil Unleashed" on this album are 'Thrash metal...' before a pastiche of cliches from 80s thrash albums like Slayer, Sodom and Destruction. All of this might truly render my enjoyment to shreds if the band wasn't so good in its delivery here. Energetic, riffing blackish/thrash metal with a load of vitriol, always breaking down at the right moment. I am reminded of earlier Maze of Torment or Bewitched with a bolder production.

Most of the tracks are faster paced and exciting, their vocals a mix of deeper grunts and cloying snarls. There is the marching opening to "Personal Exorcism", and the melodic barrage of "Nothing But Contempt" which stand out, but the truly great moments of the album come during its final two tracks, which are quite long for this style (one over 12, the other 10 minutes). In particular "One Step Closer to the Grave" impresses with its vile metal blues, only rarely picking up the pace for a lead though there is some sick double bass work in there.

Grand Feast for Vultures is a decent album, building off the debut. It has a few flaws, but these are primarily in the lyrics. They don't suck by any means, but anyone spending a Saturday afternoon mining and paraphrasing lines from their collection of mid 80s thrash metal albums could do a comparable job. Thankfully after the opening track they don't continue to beat you over the head with the 'thrash metal' shtick. We got it the first time around I think. In the end, I haven't enjoyed this album as much as I enjoy bands like Maze of Torment, Aura Noir or Audiopain who approach this mix with a raw authenticity, but Blood Tsunami are a more energetic outfit who are placed for success if the retro thrash really takes off, and this is a decent effort musically.