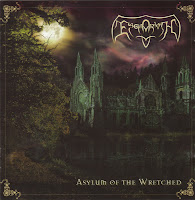 Symphonic black metal is always torn between formulaic and dull gothic indulgence and those few bands who can truly evoke an atmosphere and not just a bunch of synthesizers overpowering weak guitar lines. Russians Esgharioth fall somewhere between the two camps, their use of keyboards is not subtle whatsoever, yet they also create some of the best moments on this debut.

"The Raven" begins with a dense wall of turbulent synthesizer, before the chugging dark metal riffs enter beneath excellent, omnipresent keyboards which summon a lot of depth above the chaos of its thrashing and grinding guitars. The vocals are a hybrid of black snarls with some lower register growling. This song is both powerful and haunting. "Blood on the Snow" is anchored a little more in its guitars, with the synths taking a backseat, and while this isn't a bad track itself, it lacks some of that unique power of the first. Fortunately this atmosphere returns for "Cathedral of Lost Souls". "Bloodline" begins with some striking gothic pianos and then some interesting riffs. "Through the Pain" has several atmospheric sections where the metal dives out and it sounds like you are about to enter Castlevania 66.6: The Bloodkommand of the Drakulastic Order. I mean really evocative haunted house style sequences which do not disappoint! "Dievarication" has some nice black/death riffs below its sweeping synth chords, and it's another winner. The album closes with a sad and scintillating instrumental, another dark pleasure.

For a first album this sounds quite nice. Often the synths drown the guitars, but never fully, and in fact it's this emphasis which makes the band stand out. They're not the most technical of symphonic black metal bands, but they make good use of their skills. The cover for this album is pretty spot on. Think of decrepit asylums and estates in a moon-bathed, haunted landscape while you listen to the album, and let it carry you away to those desperate spaces far from the sun. A good debut and a band to watch!