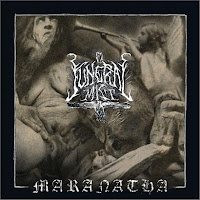 Maranatha marks the turning point of Funeral Mist's transformation into a solo project, with Arioch helming all instruments except drums, which are done by an unnamed session player. Even overlooking Arioch's work as Mortuus (of Marduk fame), it is easy to draw comparisons between these two bands, yet Maranatha never comes across as a polyp, and actually manages to interest me more at times.

Much like Marduk, Funeral Mist take the panzer approach with their up-tempo black metal assault. "Sword of Faith" opens Maranatha calmly, allowing the listener a few seconds of respite before trampling them with a stampede of blast-beats and raging guitars. However, the Marduk effect is then tossed aside by "White Stone", a stomping, stripped-down number that would only have to sneeze to find itself on the black'n'roll side of the line. Although it's a damn good song, there's definitely a feel of unrealized potential throughout, as if Arioch just needed to explore it a bit further to unleash something fantastic. The next few songs follow a similar pirouette of styles, switching back and forth between intense frenzies and more rocking moments. One of the stand-out tracks, "Blessed Curse", is a simple yet monumental dirge spanning 12 minutes of droning guitars and trumpets, propelled by a sampled doomsday prophet and the snarls of Arioch choking on his disgust. As usual, Arioch's voice is in spectacular shape, groaning and wheezing rage as distinctly as ever. The lyrical focus on Maranatha is entertaining in its focus on using Biblical quotes and samples for mockery, standing as a fresh, but still familiar, variation on common anti-religious themes.

Maranatha is a pretty fucking solid album, full of material that would be welcomed with open arms on a Marduk album, yet riddled with its own unique style. I even found it to be more consistently entertaining than Rom 5:12, and expect to come back to it more often.

http://www.myspace.com/thefuneralmist
Posted by is this your life? at 8:14 PM