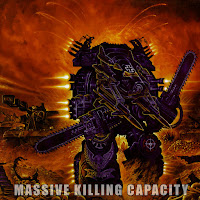 1995 was a pretty big year for Swedish death metal. At the Gates released their classic Slaughter of the Soul which would change the landscape of metal worldwide, and the melodic death scene was starting to make a large buzz around Dark Tranquillity's The Gallery. But for one of Sweden's original death metal demolition teams, Dismember, it was just business as usual, as they issued their third full-length. This is never a band I've been entirely in love with, as I don't find many of their albums to be consistent: a few good tracks, then the rest I can pass on. And while I still enjoy Life is an Everflowing Stream (their debut) most, Massive Killing Capacity is one of their better overall efforts.

"I Saw Them Die" starts off slowly with a pummeling, groovy pace, some somber melodies play alongside the chords and the track should please any fan of the Dismember/Entombed style. The title track has some nice death metal tones and a chugging verse. "On Frozen Fields" is one of the best here, with a melodic riff that eclipses into a doomy set of chords beneath the vocals. Other strong points are the pluggy and thrashy "Wardead", the dark and groovy "Justifiable Homicide" and of course the catchy "Casket Garden" which spawned its own EP.

The entire work roils in that typical Swedish tone, but Dismember have delivered a pretty clean production. Unfortunately, this derives the music of some of its sloppiness and heaviness, which in the case of these sorts of bands, is almost always preferred. Massive Killing Capacity is a tight album, and fans of Entombed's Wolverine Blues or Clandestine would enjoy it as a backup, though this band has never gone very far down the death'n'roll path of their peers (you can hear a smidgen of that style on this album but nowhere else in their career).