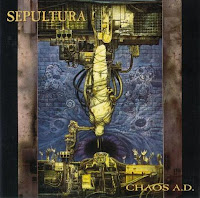 Few albums have polarized the masses quite like Chaos A.D., but I really have to admit, after careful consideration: this is my favorite release from the Brazilians. Why, you ask, would a thrash purist like myself prefer this over their faster, busier albums like Beneath the Remains? Well, for one, I found Arise quite a bore. There were a few good tracks hidden in it, but the tone of the album did absolutely nothing for me, and I thought it was a few steps backward from Beneath the Remains. More importantly, Chaos A.D. is a culmination of form. It was inevitable, really. Take the band's social and political lyrical stance, the tribal folk influence of their environment, and the down tuning hardcore breakdowns; combine these to create one of the most fist pumping pit epics ever.

I'll go one further: Chaos A.D. is probably the most mosh-worthy album in the history of metal. Almost every track here is laden with brutal yet simple pit grooves that are nearly irresistible, even to one such as myself, who has loathed the mosh pit culture since a very young age. Sepultura writes these things extremely well here. Max's angry barking and one of the best productions I've ever heard for a metal album round out the pummeling, furious statement that is Chaos A.D. Make no mistakes about it, this is one pissed off album.

"Refuse/Resist" begins the album with a powerful groove and some nice drumwork, before the infamous line Chaos A.D.! Tanks On The Streets! Confronting Police! Bleeding The Plebs! delivered just as angrily as any hardcore band. The tribal "Territory" thrives of its simplistic grooves and crazy breakdowns. "Slave New World" is a thrasher that might have also appeared on either of the previous two albums. "Amen" has the perfect, simple verse riff, dispersed by some slower drum fills and doomier guitar breaks. "Kaiowas" is a folk, acoustic piece, yet it feels as if it fits here completely. "Propaganda" starts with haunting, ringing guitars before pulverizing your face yet again with a simple riff which seems like it's just a variation of others on the album. But this is the forte of Chaos A.D., it's basically feeding you the same style of riffs over and over and having you love them every time, the power of cohesion and continuity reigns. "Biotech is Godzilla" is a decent, faster track but not one of my favorites on the album. "Nomad" begins with another ringing mid-ranged guitar, almost siren-like, before the drum fill leads into another neck breaking groove. "We Who Are Not As Others" is a progressive track with some acoustic fills, bluesy wails and gang shouts. Very effective. "Manifest" is a brutal tribute to the violence of prison population purges. The band covers "The Hunt" from New Model Army, and does an excellent job with the tune, sounding very much their own. "Clenched Fist" ends the album with another sick, grooving verse.

As I mentioned earlier, this album has an insanely good mix, recorded in England. Everything is loud and clear, the guitars sound punishing and the vocals pissed. The tribal fill inflections of the percussion are evident, and the bass runs thick. Crank this fuck and just try not banging your head to it. The lyrics are decent and meaningful, especially for the band. I have heard countless horse shit scenester complaints about how this album is 'sellout' and one of the influences that created the dreaded 'nu metal' genre, along with Machine Head and the emerging rapcore scene. But here is the catch: who cares? If all nu metal had been as good as this album, noone would have hated it to begin with. Unfortunately that was not to be, and even Sepultura started rolling downhill after this (I may not agree with the blowhards that this record was the Anti-antichrist, but I certainly agree about Roots).

Before this arrived, I had lauded Beneath the Remains as my favorite album from the band. While that remains the best of their speed/thrash style, Chaos A.D. is the album that truly defines this band for me. It's where they stopped being Slayer, D.R.I. and Metallica's heavily accented counterpart from Brazil and became an entity all to themselves, yet still has plenty of those types of thrash riffs. It is distinctive and nigh flawless. It still sounds great today. Give it a chance, or give it another.

This is a perfect review...