“Here’s your lame horse, pair of worn pants, and a club. Welcome to Calradia! Enjoy your stay.”

Alright, that isn’t actually said anywhere, but it pretty much the standard start of a game of Mount&Blade. Mount&Blade is a game originally developed by a Turkish couple, although somewhere along the way the developing team expanded to few more people. It had been in development for several years, and boasted a unique financing system, where people could buy the game while it was still in development, for a reduced price, while their registration code would work for any future versions. Of course, the price went up the closer to finishing the game got. This worked surprisingly well, and when the game got picked up by Paradox Entertainment and was put up in Steam, everything started rolling. Mount&Blade is an indie success. 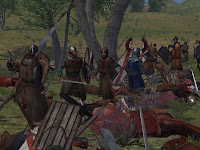 Now, many professional reviewers have given the game fairly average scores, but Mount&Blade is one of those games that boast the coveted “Civilization effect”, also known as “One More Turn Syndrome” or OMTS. It often occurs, that on a first try, the planned 30 min splurge into the game turns to realizing that it’s 4 in the morning. So, what is the game really about then?
Mount&Blade is something akin to a medieval version of Elite, where after character creation, you start off as a poor nobody in Calradia, which is a land with four warring kingdoms, populated with all sorts of scum and villainy. Your objective? Do whatever you want. You can start trading between the cities, you can become a hated rebel warlord, anything within the game’s capabilities, really. One thing is certain though; sooner or later you’ll encounter combat. And oh boy, if it isn’t fun. 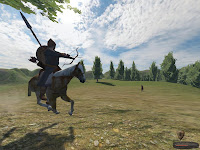 Mount&Blade is THE game that got mounted combat right (should have seen that coming just from the name). Riding on the battlefield, with a couched lance which you handily land between a knight’s eyes at full gallop is satisfying, as well as riding past peasants and swinging them in the face with a battleaxe. If you’re bit of a Mongol, horse archery is brilliantly executed, and riding circles around your enemies while peppering them with arrows is great fun. You can also take the role of a commander, and let your troops do the fighting for you.

That’s right, you can also gather an army of your own, and fight massive battles, or siege and conquer castles and cities. All of this is horribly addicting, and the game manages to pull off something that many big titles fail at: It’s simple, good fun that you don’t really get sick of. Ever. I should have some idea, I’ve been playing the game on and off for years. The reason I’m reviewing it now, is due to buying the newest version on Steam.

“But it looks like shit!!1 Itt aint as purty as Haloz!11!” Yeah? Well, the game does have a… rustic appearance, but bear in mind that it was made by pretty much two people for most of the time. Besides, you won’t mind the graphics when you slam a guy off his horse in the heat of battle. Also, the game boasts an impressive amount of mods available, and it is fairly easy to mod, introducing anything from Lord of the Rings, Song of Ice and Fire, the 100 year war, flintlock guns etc. into the game, as well as graphical improvements. 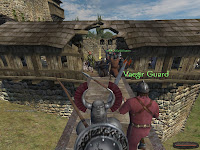 The game is fairly easy to learn, and there are wikis online that have pretty much any information one might want relating to the game. There are problems, of course. The game feels slightly unfinished, and much of the diplomacy and quest system feels simplistic. The graphics might be off-putting to some, although I’ve never really been that big on graphics as long as they do their job. There is a feeling that more could have been implemented, and some other minor problems. There are no game-breaking discrepancies though, and you won’t mind these issues when cracking skulls for the fifth hour in a row.

It might also be of interest, that whispers in the ether suggest that there is an expansion on the way, boasting improvements to AI, graphical adjustments and… MULTIPLAYER! I can imagine the 32-player online death-match, and IT. IS. GLORIOUS.

Mount&Blade is a thoroughly enjoyable game, with plenty of replay value. We need more games like this.

If you can see yourself even possibly enjoying M&B, get the demo from their website. It’s the full game, although you’re restricted to a level 7 cap for your character.

This game is pretty fun, but the complete lack of direction is apparent in all it's elements. The best sandbox games are fun because you can do "whatever you want" in addition to the structured bits that the game provides, but Mount & Blade lacks that. The "game" is basically an engine with some pretty barebones features strapped on top of it.

Everything you said about it being extremely fun is true, though, and Mount & Blade's combat is enough to keep me checking back with it every once in a while. I rarely get past playing for an hour or a couple battles, though.

Writers for games are everywhere. After so many years in development, this game really should have some sort of story.

I enjoyed the demo back when I played it, but I was really confused at the beginning of the game and never really kept up with it.

True enough, the game does feel somewhat unfinished. The writing is definitely a weak side.

The thing with M&B is, that it keeps pulling me back in, and I've played it on and off for years. I never seem to get utterly sick of it. I've derived far more enjoyment out of it than from most professional games.

Then again, I have a soft spot for oddball indie games. Dwarf Fortress...

There is nothing odd about Dwarf Fortress. It is a gaming masterpiece.