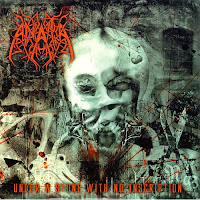 The Conductor's Departure may have been their milestone thus far in technical, progressive death metal, but with 2004's Under a Stone with No Inscription, it is clear the band were already well underway. What has always interested me about Anata and a handful of peers (Spawn of Possession, etc) is that they eschew the more prevalent tones found in most of the melodic Swedish death and the recently popular retro dimension, in favor of a lighter sound which gracefully encapsulates their rapid fire picking and progressive elements (but never lacks for brutality).

"Shackled to Guilt" launches at t minus zero to a series of fast and winding riffs interspersed over some marvelous chugs, all captured in sync by Conny Pettersson's flawless drumming. "A Problem Yet to Be Solved" begins by grinding you into dust before unleashing its adventurous guitar lines and über grooves. "Entropy Within" gets even better with its sick grinding grooves and playfully disturbing leads. "Dance to the Song of Apathy" is an excellent track, a pleasure if just to follow the guitars. The band gives no less than 100% across the ten tracks, and other standouts include "Leaving the Spirit Behind" and "Any Kind of Magic or Miracle".

Lyrically the band deals in philosophy and personal struggle more than severed limbs and mangled children. A breath of fresh air, and even if the lyrics aren't perfect, I do enjoy the metaphysical, motivational coach approach.

The album has a crisp mix to it which allows the guitars to breathe. Leads wind over Fredrik Schälin's grunts while the drums create a maelstrom of percussive idea, and the band can change it up to an acoustic bridge (as in "Any Kind of Magic or Miracle") without losing any power. In the end I wasn't as enamored of this album as much as the later Conductor's Departure, but it's a great album to check out if you are interested in the brutality and technicality of death metal sans a lot of the gore. Anata never abuse or overuse their obvious ability, and the result is a near classic effort.