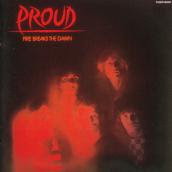 Another of those countless 80s metal acts to emerge, release a good album and then suddenly dry up and disappear, Fire Breaks the Dawn is nonetheless proof that Swedish metal had a pulse long before the advent of the country's death and black metal scenes at the turn of the decade. They possessed the typical power/speed metal style of the day, equal parts Maiden, Priest and Sabbath, with a less ambitious vocal presence (but by no means weak).

The strength of this album lies in its guitars which are always fetching melodic grace and catapulting the songs above average. "Star Fighter" is your average mid-paced metal anthem on its surface, but the classical tapping before the chorus and the beautiful brief lead bursts are what drive the track. "Echoes from the Past" moves at a bluesy, shuffling trot, and once again during the chorus a new guitar melody breaks forth and transforms the song. "United World" starts at awesome with some slower guitars almost like a nation hymn, then a dirty 'eavy metal riff with some descending, moody octave chords. The dual leads later in the song are excellent. "No Losers" has a mean but catchy groove to it, and again some wonderful guitar melodies with a neo-classical feel. The deep male choral vocals are also a nice touch. The title track begins with some powerful acoustics, but this is no power ballad, as the majority of the track is verse chorus verse chorus metal. "Dark Lady Forest" is one of the faster tracks here, and one of the best; its searing melodies part into pure 80s speed metal, and the vocalist Anders Magnell shines as his voice elevates. The riffs are great, the opening melody is almost a precursor to Running Wild's more melodic mid-career period. "Crucified" once again delivers on the band's classical influences for a gorgeous intro melody, another of the best tracks, and perhaps the most enduring. The album closes with another of its strongest "Star of the Masquerade", again dripping with gorgeous melodic leadwork.

In all, the album holds up well. It had a pretty good mix for its day, with all instruments in check and a nice bass mooring its highly melodic texture. Magnell wasn't the greatest vocalist but he gave it his best; his performance is worthy of the music. It's unfortunate the band's career was so brief, but at least they left a few of us with a positive memory. The album was re-issued on Old Metal records last year, so you may still be able to track it down if interested. Collectors and purists of the melodic 80s style when metal was pretty much just metal should find enjoyment with this.

(the band hasn't existed in about 25 years...and sadly there is no website available)
Posted by autothrall at 7:33 AM