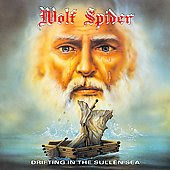 Wolf Spider's third album is one of the truly obscure gems of the 80s-90s thrash scene, an album with a complexity and progression rivaling that of European masterworks like Deathrow's Deception Ignored or Coroner's No More Color. Yet the Polish band barely has much recognition outside the die hard elements which still love this style of thrash and speed metal today.

Drifting in a Sullen Sea is easily my favorite of their albums; it possesses a playful and technical feeling to the riffs which I find dazzling. Some might find Leszek Szpigiel's vocals a little over the top, like a looser version of Alan Tecchio's vocals on Watchtower's Control and Resistance, and wilder than Szpigiel's work with Mekong Delta or Scanner. The real joys of this album are how the tones of these vocals interact with the riff tastic ruminations of Piotr and Dariusz, which alternate between classic 80s speed metal moments and progressive thrashing. The band was not above the incorporation of outside elements into their music either, there is a clear jazz and funk influence to much of the album, including some of the vocal tones.

So many of the songs on this album are good, but a few stand out with their offbeat catchiness. "Liberated Woman" has a funkish bass flow beneath the metal verse before the very unusual chorus with its choppy guitar chords and backing vocals. "Inclined" has some seriously amazing and subtle chord changes which really make this sound like Rush decided to go thrash. One of the bridge riffs is just insane, perhaps the best on the album. "My Home" is an anthem about domestic violence, with a creepy verse that conjured images of the band's namesake stalking about in some shadowy urban dig. "Enterprising Man" starts like you're about to watch a bullfight, before its funkish verse and flowing progressive harmonies. It really comes down to the fact that few albums sounded anything like this, even Wolf Spider's more technical thrash contemporaries had a different approach to their riffing.

Here is an album which sounds pretty good even now, the mix was a lot more professional than we were hearing from other Polish thrash bands of the time (Turbo, etc). Of the four Wolf Spider albums, I found this to be their best, though Kingdom of Paranoia and Hue of Evil do have some similarities. It's not perfect and it hasn't had a lasting impact on me like, say, Deception Ignored. But it was pretty amazing for its time and should have lead to great things.