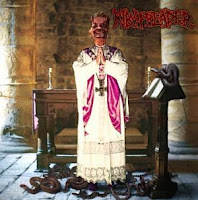 I feel like a separate blog may be in order just to cover all of Rogga Johansson's many projects, since the man has almost single-handedly crafted a Swedish retro death metal scene (to be fair, he's had a lot of help from the right places). Fans of his newer projects like Revolting and Putrevore would do well to check out Ribspreader, one of his earlier efforts. They've released two full-lengths a few years ago; of these Congregating the Sick is the more recent and superior.

There is no surprise as to what you're going to find on the album: pure old school Swedish metal which benefits from a more modern, crushing production. Influenced by all the usual suspects (Dismember, Entombed, Grave, as well as early Death), Rogga and friends bludgeon through 9 tracks of consistent mayhem. Drums were provided by Johan Berglund (who also plays bass in one of Rogga's other bands Demiurg.), and some snappy leadwork is offered by Dan Swanö, who also recorded the album.

The album begins with one of its best tracks, "Autopsy Obsessed", a rush of primal grooving energy with a great flurry of leads over the first rhythm. "Morbid Reflections" is a little slower at first but picks up nicely. "Bleeding You Dry" is similar to the first two tracks with a mid-paced delivery packed with groove. "Breeding Sickness" is a little darker, with an evil bluesy intro riff that transforms into some very old school speed picking and carnal breakdowns. "Dead to the World" is a veritable feast of blazing early 90's Swedish death which would do any moshpit proud. "Maggots (Fucking Maggots)" may not be as great a hymn to the larval carrion feeders as that of the great GWAR, but it will suffice. Another of the album's best tracks is closer "The Crawling".

Your mileage with Congregating the Sick will vary based on your relative love of old school Swedish brutality, including many of Rogga's other works. The music isn't amazing but it's tight enough for an album trying to capture that lost magick so many death metal albums lack. The lyrics are pretty average, but unfortunately few death metal fans pay attention to such things. I consider this the better of Ribspreader's two full-lengths but some of Johansson's other work is a little better.