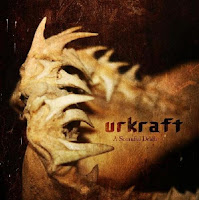 This is another of those cases in which a band has split up but managed to release their swan song album free to fans via downloads. In the case of Danish Urkraft, it is their third full-length, and probably the best. The production on this is quite good considering they did it themselves in a small home studio. In fact it sounds better than their sophomore album The Inhuman Aberration which was recorded with Tue Madsen. The guitars are crisp and glowing, the bass and kick are deep and the vocals tear straight through.

Urkraft were a melodic death metal band, so the direct influences of At the Gates are evident, yet the vocals are more of a gruff and meaty style. The guitars are a thrash/death hybrid but the band also uses a lot of driving octave chords for atmosphere and this does create some nice layers to the sound. There are a few songs on this album I really enjoyed, like the powerful "The Prophet & the Rose", the gutwrenching melodic thrash of "Shrieking of the Mad", or the triumphant "Miracle Grotesque".

Despite the energy and the excellent mix of the record, I didn't feel the material was catchy enough that I'll return often. But there is a good chance fans of anything from Soilwork to Meshuggah might enjoy this album, and it's superior to their other work. If you like your melodic death with a no frills attitude but a modern appeal, then what do you have to lose? It's free, go and check it out. We'll have to see where these gentlemen end up next.