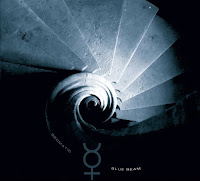 Blue Beam is the sophomore full-length from a collaboration formed in the Netherlands. The album is best experienced as a journey, I recommend using it as background music to some otherwise routine activity, preferably in the dark. :)

At its core, they create a hybrid of electro/ambient music, but this is infused with tribal percussion, world chants, and even robotic vocals. These all slither around the spine of the throbbing, pulsing sound to create a dark aural atmosphere which I could picture listening to in some long obscured opium den within a granite city block. I thought the cover image for the album was also quite fetching because it gives you a precise feel for how this album flows into your heart, haunting and irresistible.

This isn't the type of album where I really want to pick out individual tracks, I find it is best listened to when you have an entire hour or more to kill and want a consistent background. From the robotic bounce of "The Bliss", to the tribal and cerebral "Holographic Messiah", to the cyber jungle visions of "Radiating an Aura of Love" you will be taken to rapture. Other excellent moments are found in the very arabesque musings of "Redemption" and the sparse/minimal vibes of "Dark Technology Ghost".

The album sounds great, I zoned into it while grinding on some computer games and I must admit I found that time itself had passed at an alarming rate because the beats plugged directly into my consciousness. I wouldn't call the album perfect, it's really quite simple, but all too effective if you have the time to invest and the right environment in which to listen. Enjoy!