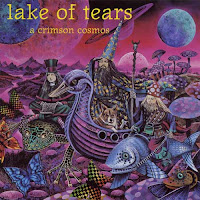 Sometimes an album will come along that is just so damned unique and wonderful that you will find yourself screaming from the rafters on the injustice of its obscurity. How could this have come and gone with nary a whisper? Lake of Tears' 3rd album A Crimson Cosmos is such a piece, a beautiful effort of doom metal with folk and 70s influences, and psychedelic and fantastical themes to many of the lyrics. Their previous album Headstones was a strong one, but this takes the cake and remains my favorite of the band's career.

Although it doesn't lack for heaviness where it counts, a light heart is mandatory to appreciate the band's whimsical lyrics and flights of fantasy. "Boogie Bubble" begins the album with the slow pace you will come to expect on most of the band's tunes, with a catchy doom rock riff complemented with organs, softly tolling bells, and sweet little leads. "Cosmic Weed" rocks harder, with an unforgettable chorus and a perfect chugging gait. The simple and repetitious lyrics to this song exemplify the band's sad but beautiful perspective. "When My Sun Comes Down" is a sorrow-filled, slow moving folk rock epic, enveloped in glorious atmosphere. "Devil's Diner" is a pure rocker, with sweeping pianos. Try and imagine Elton John or Jerry Lee Lewis playing Swedish stoner rock. The lyrics are menacing in the sweetest possible way:

"The Four Strings of Morning" picks up with a pumping bass line, sparse but excellent use of rocking chords, more of the graceful pipe organ sounds in the distance, and an excellent chorus hook. Brennare's vocals sound particularly vulnerable and powerful here. "To Die is to Wake" is a beautiful and inspiring instrumental. Seriously, wake up some morning, look over the arctic wastes of winter New England as the sun breaks the horizon to this. Some of you might not live there, but try and imagine. Because imagination is what this album is all about, as evidenced by the next two tracks. "Lady Rosenred" is a catchy folk jig duo with Brennare and a female guest. The lyrics are beautiful as they recall times of olde and time of fantasy. Any song that talks about 'bards singing in the shadows' and 'jamming with angry mages' is alright with me. "Raistlin & the Rose" is an amazing track which recalls 80s radio rock in its use of synthesizers, yet the doomy chords are still plugging away beneath. Dragonlance fans should get a kick out of its very somber but catchy lyrics, but it's a vague enough romantic interlude that all should apply.

The album ends with the very folksy and psychedelic title track, recalling Pink Floyd. It's a chill and fitting end to such an amazing experience. And I mean that; this was the first album of its type that I had heard, and a rousing success at mixing its various elements. If Tiamat, Iron Butterfly and Pink Floyd hung out, tripped their balls off, and wrote a record, it may sound like this. This is the also the turning point for Lake of Tears, as it departed from the more straightforward folk/doom of its predecessors. The band continues along this route even on their latest, the excellent Moons and Mushrooms (second only to A Crimson Cosmos).

Brilliant and under appreciated.