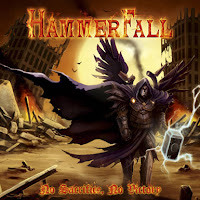 No Sacrifice, No Victory is the band's 7th full-length album, and not one of their best. "Any Means Necessary" is a pretty typical 'single' style track, with the beefy chorus line and an opening slew of Primal Fear/Judas Priest power metal guitars. "Life is Now" reminds me a lot of Twisted Sister in the chorus, though of course with the Cans range. "Punish and Enslave" rocks out, pure 80s metal, catchy and completely kicking the ass of the first two tracks. "Legion" has the standard European power metal anthem feel to it, but some nice old school Helloween melodic leads spice it up. "Between Two Worlds" is a forgettable power ballad, and "Hallowed be My Name" rocks as hard as "Punish and Enslave". The instrumental "Something for the Ages" has some fine moments if you fancy your neo-classical shred. The title track is also pretty catchy. The rest of the tracks are also forgettable, including the "My Sharona" cover. Come on people, do we really need ANOTHER metal cover of fucking "My Sharona"? It was better when Destruction did it almost 20 years ago, and even then it was lame.

A solid production as usual, the band creates the perfect vehicle for Joacim Cans melodic voice. I was pleasantly surprised that some of the lyrics here weren't as bad as usual, considering the band's repertoire they earn a passing grade. The downside is that with the exception of a few tracks, the album easily gets lost in the shuffle of far better bands playing melodic heavy metal. HammerFall always seems to play it by the numbers a little too closely, it feels like a heavy metal factory pumping out a stale formula with mixed results. I'd love to fist pump in the front row with fellow 'bangers to "Punish and Enslave" or "Hallowed be My Name", but there's nothing else here which tickled my metalbone.

I've always kind of liked Hammerfall, for whatever reason, so I'll probably give this a listen, but this doesn't bode well.