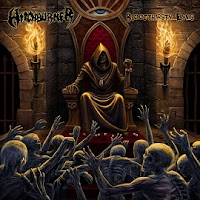 Witchburner's the kind of band I've always really wanted to like more than I do; in no small part due to the sort of aesthetics they bring to the table, a very down to earth retrospective of what made the nastier side of speed and thrash metal so hellishly fresh in the mid through late 80s. Granted, they've only had a few full-lengths that were above average (in particular Incarnation of Evil was a standout), and none that were exemplary, but in a world where newer, comparable German bands like Ketzer, Nocturnal and Cruel Force are receiving solid underground recognition, I think it is important that this band, who formed in fucking 1992 and have seven albums under their belt, get a little more credit for always bringing that blackened, death-driven thrash and speed metal...

That said, the music Witchburner writes in of itself is not all that unique. Combine the crisp mid 80s Reign in Blood guitar tone with Possessed vocals, and season liberally with lyrical themes and imagery redolent of Venom, Piledriver, Sodom, Destruction, Kreator, Bulldozer, Infernal Majesty, and Hobbs' Angel of Death not to mention the elephant in the room I already hinted at. The Germans' quickened clips of high velocity old school reek of Hell Awaits or Reign in Blood, only they feel less explosive by virtue that we've already been exposed to similar for decades. I'd actually posit that a number of the note progressions here feel so generic and tired that they should have been left off the album entirely, like the descending tremolo pattern after 1:30 in "Path of the Sinner", brings nothing new to the table to the extent that it actually cracks the table in half with age. Throughout Bloodthirsty Eyes, the leads are usually the same atonal rabble that was so popular in the 80s, only none of them really scream out at you. Bass is pumping and deep, but the lines rarely do anything so interesting, and the drum beats are fairly stock, the one thing that might separate them from their forebears would be the more even double kick hammering.

Witchburner has a new vocalist here, one Pino Hecker, who replaces Metallic Mayhem with a set of Jeff Becera pipes. Seriously, if Jeff suddenly wanted to revert to bass, this guy could serve as a stand in for the original with ease. On the one hand, those who love the style will be ecstatic, but while I do like the way Hecker's inflection bludgeons and resonates over the brisk, flighty trails of the guitars, it does grow a fraction monotonous at times, and the more seclusive snarls and growls don't really compensate. But if the band had been composing some top notch material here, it would come together like napalm gel and an unsuspecting village. Sadly, that's just not the case. I've got a natural attraction to this style, which is slightly more death/ thrash than black/thrash, but though the songs here move along with an acceptable confidence, too few of the riffs stand out from the writhing mass. Addicts of acts like Deathhammer, Aura Noir, Antichrist and the three German bands I rattled off in the top paragraph would find themselves in familiar territory here, which is enough to provide a cursory, visceral enjoyment of the album, but little more. Not bad, but not as good as their last disc Demons (from 2010) or Incarnation of Evil.