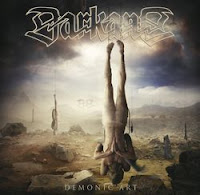 “I feel I’ve reached a stand still in the creative process with Darkane and together we came to the decision to let fresh blood into the band for the upcoming fifth album. Darkane is constantly evolving and I'm sure that this ignition will be great for the band." Such was the official notice given by Andreas Sydow to the fans, on his departure. But I will posit that we all know the REAL reason Sydow stepped down: because there was no fucking way in hell the Swedes were ever going to write anything as good as Layers of Lies; and if Demonic Art is any indicator, then I must speak the truth! Well, it's not as if this was the shittiest followup possible, and there are a handful of exciting moments throughout, but for some reason the material here feels recycled, 'old hat' ideas that were taken out of the coat room just to maintain some stability in Darkane's continued existence.

The 'fresh blood' in this case was fellow scenester Jens Broman, who had appeared on a Construcdead album as well as in the supergroup The Defaced, which Darkane's guitar wizard Klas Ideberg. I dug his performance on that band's sophomore outing Karma in Black, which was a sort of hybrid of groove metal circa Machine Head or Pantera if given a kick injection by the local melodic Swedish death/thrash. He's actually a natural fit for the band, not only because of his prior association with the members, but by the fact that he can do slightly melodic hooks and gritty snarls, but I was quite shocked when I heard this that he was doing his best at a Sydow impersonation. Granted, Andreas himself was taking stylistic notes from the first album's vocalist, Lawrence Mackrory (who has now returned to the band), but here the gulf seems ever slighter. What I'm getting at, is that this is not really feeling like 'fresh blood' after all, but rather the same blood on the verge of congealing. He just doesn't add anything new to the sound, nor does he do such a manic and inspiring job as his predecessor, so Demonic Art's success is left up entirely to the rest of the band.

And they try. They really do. For every lumbering, vapid chugging groove in the foundation, they'll attempt some wavy guitar theatrics. Like Layers of Lies, the album isn't short on atmospheric segues like the synth intro to "Execution 44", or the warm, cozy acoustics and lead of the interlude "Wrong Grave". Much of the writing seems like a mash up of the prior two records, especially the slower Expanded Senses chugs, but this album is far more cleanly produced, and lacks some of that rumbling density. On the whole, it just fails to really convince anyone with its atmospheres, because they seem like uninteresting dressings for a series of thrashing riff progressions that are far from Darkane's best. And that is really why this album sits at the bottom of their barrel (without spilling out onto the floor): its comprised so largely of ideas from the first four, or Ideberg's other work in Terror 2000 or The Defaced. Which would be fine if the band could rifle out some emotionally charged, memorable chorus parts, or the infectious rhythm and lead guitars that thrust the last album into my playlist of perpetuity; but even at its most jerky or progressive, like "The Killing of I" or the warmer "Demigod", it falls short of leaving an impression...

Technically, this is no disservice to the futurist thrash the band had been exploring since the late 90s, but it feels like a step sideways and then in reverse. There's just nothing here like a "Secondary Effects", "Layers of Lies" or "Vision of Degradation" to get the blood flowing. The musicians all turn in dextrous and astute performances, and the cleaner production values (at least over Rusted Angel or Expanded Sense) mark it among their more accessible works, but it sort of reminds me of one of the 21st century Nevermore albums, in which there is such an intense, calculated effort that leads little quality emotional resonance to the songs. I don't really want to blame Broman, because he's doing what he can to fit into the band's history, but perhaps the Swedes might have tried something different and really evolved their sound...instead of half assing it. Demonic Art is sleek, professional, and busy enough to listen through a few times, but the well of compositions seemed to have dried up here. Best wait for another rainstorm before venturing out again.