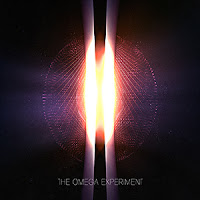 While outer space is something I've long considered a cold, hostile and unforgiving territory, The Omega Experiment's music begs to differ: what if it were a void of golden warmth, radiating from a billion billion stars? Technically it is...but I'm not about to remove my oxygen suit. Now, lyrically, the Michigan duo's eponymous debut deals largely in more personal subjects like addiction, but the structure and production of the music definitely sets one soaring through the heavens as if riding a solar ray-powered vessel. This is a pretty positive experience as far as the quasars of melody erupting everywhere, to the point that I wasn't quite sure what to think of it for the first few tracks, until it really started to settle into my spirit and proved to be both varied and consistent, with much of the strongest material coming deeper into the track list.

I should probably get this out of the way: The Omega Experiment sounds quite a lot like the work Devin Townsend was putting out through the latter half of the 90s. Bold, modern sounding, with a lot of pop gleam in both the vocals and studio mix, incredibly harmonic vocal arrangements, but also the propensity to get a fraction darker and nastier. If you had presented this album to me and claimed it was the latest from Hevy Devy featuring guest vocals, then I would have had little cause for suspicion. Only when you dig deeper into the details do you really start to notice differences. For one, while the vocals explore a similar range to that Canadian soundsmith, you'll pick up hints of anything from Geoff Tate's higher pitch, to a little bit of Sting (The Police), hell I even thought some of the mid ranged lines reminded me of emo bands like Sunny Day Real Estate or Sense Field. There's quite a lot happening, but the harmonies are smooth and impeccable, even when the band are layering in narrative samples, even countering two off against one another.

The Omega Experiment involves a lot of synthesizer sounds, just as prominent in fact as the burgeoning rhythm guitars circa Towsend/SYL or Fear Factory. From proggish paeans to orchestral strings and choirs, they are nearly constant through the near hour of material; but thankfully you'll get quite a lot of variation that draws upon anything from a woodwind section (clarinet tones) to a sizzling techno subtext that pops up in a few spots. In fact, I'd say some of my favorite moments through the disc were those that flirted with a sheer sense of ambiance, like the end of "Terminus", or the entirety of "Tranquility" where it's paired up nicely to some breezy vocal melodies. These provide a nice, temporary escape from the denser composition that dominates much of the play time. Lead guitars are frequent and fluid, heavily inspired by a little of the 80s shred (Steve Vai) or prog rock flair (Allan Holdsworth), and the rhythms, though never truly dissonant, hit hard enough that they almost transcend hard prog metal straight to djent, albeit with less mathematical hustle.

The programmed drums are so well tuned and ordered that you'll often forget about them, and the bass playing explores some deep grooves and contours alongside the guitar, but really this an album on which I paid most attention to the shining vocals, which are often themselves drowned in effects that scatter them through the interplanetary atmosphere. To be honest, not a lot of these are catchy enough that I kept feeling an itch to replay them, but at the very least they exhibit some talent and effort. What I could make out of the lyrics also felt a little too basic and uninteresting. I rather enjoyed when the band gave glimpses of its darker side, and wouldn't be averse to them pursuing more dissonance and even bleakness on future recordings; but for what it is, The Omega Experiment is a pleasurable enough time killer which may very well appeal to fans of Devin's Ocean Machine, Infinity, etc; or perhaps as a 'happier' mirror universe to Martriden's Encounter the Monolith, sans the growling. Not perfect, and not always so unique, but clearly some love and effort went into the production of this shuttle ride.