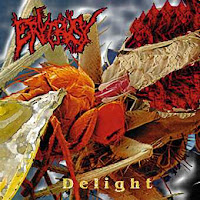 Sex and brain surgery. These seem to be two of the lyrical fascinations of Erytrosy's 2001 sophomore Delight. A strange album title when one considers the sounds on display, and an even stranger cover image for the death metal genre; but hey, if it were any indicator that the band was moving in a more experimental direction after their rather standard (if ahead of the curve) brutal death debut Incomplete Minds, then it would have my full support. Sadly, not only does Delight fail to mix up the aesthetics of its predecessor, but after five years, one might have been justified in having higher expectations...than this. The Slovakians have spun off into a brand of brutal, grind-tinted death metal that is far less interesting, and ultimately a banal exercise in futile, dime a dozen riffs.

You've basically got your standard 4xchug -> tremolo burst intensity here, which grows quite old in a very short time. I guess a good comparison would be Napalm Death's 90s output, with a bit of Suffocation, Cannibal Corpse and Internal Bleeding thrown in, but Erytrosy is not quite as riffy. In fact, you could pay me to listen to this album a few dozen times and I would have a hard time remembering a single chord progression, that's how generic and below the radar this music is. The vocals sound a bit more like Mark 'Barney' Greenway than they did on the debut; not that they were unique on the debut, but this style has always tended to bore me after a few lines, and it's just another of the underwhelming factors in what makes Delight such an also-ran. I can't exactly fault the band's aggression level here, because some of the spastic death/thrash punchlines they weave off the chug-chug setups are appreciably nimble, but the notes played seemed to just have been safely snatched from whatever first idea comes to mind. There's not a heck of a lot of 'musicality' here aside from men playing death metal on instruments. The lead sequences are intensified, but not enough to save the rhythms leading up to them...

The album also sounds like arse, and in fact it seems as if even the limited budget of the debut might have been floundered away. Guitars are brasher and noisier, and the drums have a lot more crash and burn to them. But both the treble and bass dynamics of the rhythm guitar seem out of step, and it honestly sounds like a well rigged live performance or a demo than a studio effort. Compiled with the lackluster songwriting that seems like a step back from the brutal aerobics of Incomplete Minds, it becomes a difficult disc to sit through for more than a few minutes. There's just nothing of interesting occurring anywhere. No highlights, no riffs that urge me to strain my neck in response. Yeah, the bass playing still gets busy, and sounds decent against the other instruments; and the 26 minute play length ensures that it's not a whole lot of material to become exhausted with. It's not necessarily an 'awful' album, or an abject failure, but it's difficult to justify when there were by 2001 about 15 years of great death metal records to pore over. I'd take the Slovakians' debut over this any day, and I don't blame them for putting the group on an indefinite hiatus after this.