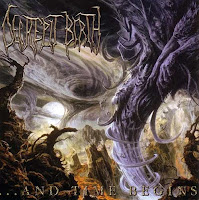 Like a number of their other Californian peers, my investment in the music of Decrepit Birth has directly correlated to their inclination with their movements towards further musicality. In retrospect, they've grown into quite a fascinating, progressive death metal powerhouse with a solid grasp of melody and contrast, but turn back the clock about a decade, and you've got a pretty average brutal death metal act that struggled to distinguish itself from numerous others. I remember a bit of buzz over ...And Time Begins, but I feel like people are often too forgiving or have pretty low standards when it comes to this niche. For me, it's not simply about sick drumming and gorgeous, gruesome, cover art (both of which this debut clearly possesses). One of my criteria for brutal/technical death is the following: if I can listen to a single track at random from your album, and receive just about everything I need to know, all of its potential emotional impact; and then subsequently confirm this with numerous runs through the entirety of the play length, then there is something seriously lacking...

A criteria from which, unfortunately, the Decrepit Birth debut failed to redeem itself. The inaugural battering of the Californians was essentially a Suffocation clone with a few Cannibal Corpse-inspired riff structures. Also with a strong hint of their fellow statesmen and label mates Deeds of Flesh, not only during the faster, percussive spurts of muted guitars, but also the very design of their logo. ...And Time Begins is brutal to a fault, and it's performed with no dearth of competence or dexterity, but the fact is I can select about 2-3 minutes of material here and have heard all I really care to know. The music falls short of evoking any sort of true menace or evil atmosphere, it's merely jocked up on steroids and attempts to steamroll its listenership into stunned submission, only it doesn't have the riffing strength to do so. It entirely wastes its meticulous and clinical nature on boring rhythm guitar progressions that lack depth and variation. On a strictly rhythmic level, there were some flighty and bombastic passages scattered throughout the 30 minutes which, under a better choice of notation, might have shined, but they're thrown away on predictable and uninteresting streams of palm mutes that don't show a lot of effort beyond their sheer acrobatics.

They try to vary it up occasionally, like the roiling, dissonant grooves that open "Of Genocide" which feel like a mix of Consuming Impulse Pestilence and Bloodthirst era Cannibal Corpse, but those don't seem to pay off either. The vocals are a genre standard, blunt guttural with a little growled out sustain, once in a while flirting with a toilet bowl tone; perfectly suitable for the style, and never really the forte of Decrepit Birth even on their ensuing, compelling efforts, but yet another element that fails to evoke any sort of menace. I mean, let's lay it on the line: when I see a horrific, enthralling cyclone of lost souls or demons against an alien, harrowing landscape of cyclopean, Lovecraftian proportions, I want the music it represents to scare the living shit out of me. I want to be afraid. I'm PAYING to be afraid. But the constant, spurious concussions being wrought with the guitars, vocals and drums feel like little more than an exercise. Like the soundtrack to a crowd of neanderthals grunting and wagering the bones of their latest kills over a chicken fight. Or death eagles, or whatever the shit they used back in those times when they crawled out of their caves for a social.

Me Oog! Me crush you! Imagine that if it were repeated about a million times, accelerated and decelerated and then layered across numerous tracks and tempos, and you've got a fair approximation of the range of these concise tunes. That'd actually be fine if there was a riff or two worth a damn in each. Not gonna happen here! Tim Yeung turns in his usual, mercenary brand of annihilation, but he's almost overworking himself, because he's not used to support anything worthwhile. The production of the guitars and drums is decent, a slightly more iron clad approximation of the Deeds of Flesh records of this time, but I felt like the bass playing was largely lost in the shuffle. The chugging simply crushes it to a single flat dimension. Lyrics, which eschew the stereotypical gore for more cosmic and nihilistic themes, are honestly the best part of ...And Time Begins (aside from Dan Seagrave's artwork), but they too are suffocated by the bludgeoning, bland songwriting. As I was revisiting this, I kept thinking to myself: put something here! A lead! A sample! A keyboard! A melody! A REAL RIFF. Decrepit Birth would not oblige me here, and though it's hard to be peeved in retrospect, since they too were aware of such limitations and evolved significantly, I'll oblige in return by putting any thoughts of this debut to rest.