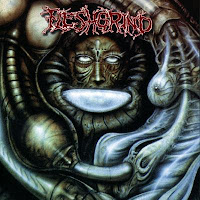 Fleshgrind was one of those 90s arrivals that I almost wanted to throw my support behind simply on principle, but then found the sentiment at odds with just how banal and ineffective their music was, not only in the long term, but after a mere few tracks of exposure. They seemed for all purposes like a humble group of guys doing what they loved, but despite Destined for Defilement's intriguing, H.R. Giger-like biomechanical cover art perversions, a decent moniker and logo, there was just nothing they spewed unto their genre that hadn't already been inseminated by far more interesting outfits. This debut had 'also-ran' smeared all over it, both lyrically and musically, and while Fleshgrind was not particularly awful at churning and chugging and exploring gruesome concepts, we'd already heard far better from bands like Cannibal Corpse, Cryptopsy, Suffocation and Deicide. Which would not be a problem if they were writing songs with riffs that dug into your flesh like the meat hooks that inspired so many of these bands' concepts. Which, sadly, they were not.

Destined for Defilement is essentially a poor man's None So Vile traveling at a more moderate speed and sharing its lane with Pierced from Within and The Bleeding. The most distinguished component throughout the brief 29 minute run time would be the guttural belching of Rich Lipscomb, which was more or less like a natural evolution of the Chris Barnes style into more brutal, amphibious territory. 'Swamps of the Mutilated' Lipscomb could occasionally dial this back to a more dry, Floridian bark, so there was actually a potential for some variation, syllabic lines shifting between arid and saturated intonation, but where a superior set of songs might have really supported and highlighted his performance, we are instead delivered vapid riffing structures that utterly fail to leave an impression. The real detrimental constant to Destined for Defilement is its inability to generate any sort of menace or excitement. It's not trailing along like a slug, but the overuse of mid-tempo, staccato chugging occasionally interspersed with older school tremolo riffing just seems like it was pulled off an uninspired blueprint. The riffs jar and crash into one another with little unity, and you might be able to snatch a few from one song and then transpose them into another and not notice a difference.

That's not to say that, by 1997 standards, this music was entirely generic or unwelcome. It obviously has yet to run its course, since a lot of today's lords of underground brutality are still working off the same blueprints, but there's very little flash or finesse to fill in the creative gaps evoked through many of these riffs. I'm serious when I say that it wasn't until the fourth track (of nine) on this album, "Sordid Degradation" where I felt that the guitar had written anything even remotely catchy, and even there it's pretty standard death/thrash without a concerted, memorable hook or evil melody. All of the instrumentation functions as intended, like a gang of tire-iron-wielding miscreants beating in the carapace of an automobile, but the composition is modular and ultimately insipid, with the note progressions lacking anything disturbing, dissonant or ominous. Sort of like some phoned in, post-shark jumping horror flick sequel that comes laminated in a frightening package, but very soon collects dust on your DVD shelf. A brutal bore, but a bore nonetheless.

Production is also not the forte here. The drums have the requisite level of double bass muscle and some sub blast acceleration, but the kicks feel like someone hammering away on a vinyl seat cushion with their feet, and the snares and crashing percussion feel overly polished and plastic. The bass playing is honestly not that bad when you can hear it, but it's too often subjugated by the prim punch of the rhythm chugging, and even when it cuts through, the tone is just too dry. Some heavier distortion there might have helped to offset the sterility of the rhythm guitar, which is also just too clean to really leave a dent. The sparse, frenzied clinical melodies that erupt also feel subsumed by household bleach or other chemicals; they definitely have a tint of the tone of Death's mid to late 90s progressive death output, which I was not always incredibly keen on, but then again they're not able to generate with riffs on a Schuldiner level anyway. On the whole, Destined for Defilement lacks power and intensity due to its introverted mix.

The lyrics weren't exactly the worst out there, but then they're really just a pastiche of subject matter and phrasing circa Cannibal Corpse, Mortician, and Obituary, with the usual misogynistic and necrophiliac focus, but never too disgusting or convincing. Nothing inherently awful of distracting, but nothing that gets a blood rise in any organ. In the end, it's difficult to think of Destined for Defilement as anything more than a coathanger-armed coattail-clinger to that stubborn wave of gore and brutality that thrived in an underground where many other metallic niches had dissolved in the 90s. It had its collectible shock value, and was pretty cool to look at, but in terms of depth or individuality it was just another in a herd of livestock being goaded along by the prods of inspiration that predated it by about 5-7 years. I've heard worse, but that's far from enough compulsion to revisit or recommend this.