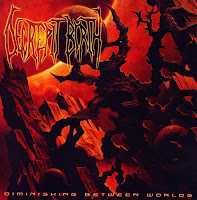 Sometime between the years of 2003 and 2008, as Decrepit Birth was plotting its sophomore assault for Unique Leader, Bill Robinson and crew realized that they were actually musicians, and not just fancy troglodytes who knew how to club their prey down at insane speeds. As a result, Diminishing Between Worlds was a dramatic improvement over ...And Time Begins, to the extent that one could argue the first track alone "The Living Doorway", possessed more musical value than the entire debut. A lot of this has come through the evolution of Matt Sotelo as a guitarist and all around musician: the man fucking OWNS this effort, employing more melodic, technical and varied guitar work in addition to bass lines that can be distinguished from the album's roiling, brutal undertow. And all of this was accomplished without sacrificing extremity! If anything, Diminishing Between Worlds is just as brutal as the debut, only in more than one way. It's as if prehistoric fireworks suddenly alighted the sky over a stolid, rocky ridge, and then molten inspiration began to flow free and disintegrate anything in its path.

Decrepit Birth was not alone in this transition, as a good number of the other Californian bands (Odious Mortem, The Faceless, Arkaik, Inherited Disease) also were making strides forward in musicianship and quality; but clearly they made a broader metamorphosis between albums, than, say, Severed Savior made between Brutality is Law and Servile Insurrection. While the first album drew almost entirely upon its Suffocation and Deeds of Flesh influences, Diminishing Between Worlds tries its hands at weaving threads of Death, Cynic and Atheist through its punishing foundations. While Robison's growl is the one constant binding it all together, the guitars are fucking frenetic to the point where Sotelo is often engaged in overmuch frivolous leads. He's certainly upped the ante with this 'big reveal' of ability, but more important to me than the indulgent, screaming lead sequences were the clinical melodies being invested into the rhythmic matrix. Radar! Radar! Other strings have been discovered on the guitar. Prepare antiaircraft measures on the double! Granted, there is a certain degree of wankery involved: almost like he succumbed to a Lawnmower Man level influx of ideas and couldn't contain all the newfound brilliance...not all the leads and melodies are very catchy...but even so, there is so much more of note(s) happening, a refined fusion/jazz undercurrent

Decrepit Birth had become compelling, folks, or at least, compelling to those who've an interested in this sort of 'all around package' of technicality and chops. Yes, that means if you fucking loathe death metal beyond Mortal Throne of Nazarene, Severed Survival and Slowly We Rot, then this is clearly not your cup of tea. And it wasn't just in the guitars. Matt's bass lines are smooth and complex, joined to the guitar melodies without merely 'following' them. Atmospheric synthesizers, often like distant choirs, are used sparsely as a background enhancement to the music's otherworldly nature, and clean guitars are introduced here in the instrumental "The Enigmatic Form". They had a new drummer for this, KC Howard, and he did a great job of following in Yeung's footsteps. Perhaps a fraction less agile, but his hard hitting really helps cover some of the aggression lost by the switch towards higher pitched notation, and he's just about as mechanical and monstrous as you'd find from this particular scene. Bill Robinson had also improved. His natural timbre wasn't all that different, but he sustains some great gutturals that decay off into the atmosphere, and the timing and percussion of individual verse lines seems more inviting to the imagination.

Most importantly, Diminishing Between Worlds is just fucking loaded with great riffs. The song quality is quite consistent throughout, and while they'll occasionally throw out a bland pattern or two, the majority of the melodic riffs continuously draw the ear. The song lengths are stretched to help contain this wealth of new ideas, but the album still clocks in at a tame 45 minutes, about 50% more than the barren debut. "Reflection of Emotions", "Dimensions Intertwine" and "Through Alchemy Bound Eternal" all beg the question: what might Suffocation have sounded like if Chuck Schuldiner joined their lineup in the late 90s and was given some serious creative input? The external and internal explorations of this sophomore seek to answer that question, emblazoned in cutting edge musicianship, and philosophical (if a bit bland and bordering on mumbo jumbo) lyrics. Not to say that this is perfect: it's not a personal favorite tech/progressive death metal effort, but clearly a switch turned on, the emergence of a bright voice in the genre. One that would grow slightly in intensity for the next album, Polarity, which was less of an overall evolutionary step, but ramped up the riffing quality even further.

Verdict: Win [8/10] (condemned to the everlasting)