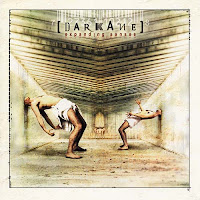 2002 would bring about a reversion to a more atmospheric Darkane, which was both reminiscent of their Rusted Angel debut, and at the same, time, not exactly. This is a largely groove oriented disc which sees its ceaseless, muscular chugging embroidered with all manner of modern atmospherics like melodies, subtle orchestration, and it even goes as far as dabbling in some industrial machine noises. Expanded Senses was in a way symptomatic of the Swedish melodeath scene at large, in which all the major bands were attempting to strive towards modernity and stray from the formulas of the 90s. This same year, for instance, Soilwork and Dark Tranquillity hit what I'd consider to be their respective, creative summits (Natural Born Chaos and Damage Done), producing two of the finest works in this sub-genre, while In Flames was totally watering down its power-meets-death metal approach into something I could only describe as bouncy, pasteurized emo-death (Reroute to Remain)...

Compared to their more recognized countrymen, Expanded Senses was a slim evolution indeed, but it did swap some of the more acrobatic guitar work of its predecessors for thicker rhythm progressions over which Andreas Sydow's passionate vocals were better embedded than on Insanity. There are glaringly obvious throwbacks like "Violence from Within", in which the hasty, muted tremolo rhythm reeks of "July 1999" from the debut, while "Parasites of the Unexplained" might have fit snugly onto Insanity, but in general this is a lot of burgeoning, dense and simpler rhythm grooves like "Innocence Gone", "Imaginary Entity" or "Chaos vs. Order" (a personal favorite here). If you hate the overuse of the palm mute in your metal, then this is hardly an album to win you over, but to Darkane's great credit, even the most dumbed down material on this album is lent some texture by all the background happenings. Sydow's brash cleans bounce around in the mix like someone howling across a radar field, while Peter Wildoer lays down a foundation one could build a half dozen stories upon. It's very turbulent, bass-laden music which seeks to overpower the listener more than either of the earlier albums, but there's plenty enough subtlety if you're able to forgive its brickwalled crushing production and let it pummel the snot out of you.

It's certainly not all slower paced, and I'd actually estimate a good 50/50 split between its two polar tempo regions, but some of the best stuff here just lays you out with the combination of industrialized chugging and sampled symphonics. You can feel the down tuning of the guitars here so much more than the other albums, primarily because of their stalwart devotion to slugging you in the intestines and inducing a riot deep in your bowels. No acoustic choir present this time, though they do pull in Lawrence Mackrory to do a bit of a 'duet' with Sydow on "Chaos vs. Order". Always classy when a bands present and former members get along well enough to 'keep it in the family'. The leads throughout the disc serve only as impoverished hangers-on to the bludgeoning bourgeoisie of the rhythm guitar, but I found them tasteful enough to prove more memorable than any on Insanity. Sydow does a lot more melodic singing, and I'm still not positive that the right balance had been struck here for him, but certainly there is a lot more depth and weight to his performance than some of the duller lines populating the previous album.

Definitely not an album I 'loved', but I found it overall more catchy, its arrangements stronger than Insanity. As if the band took a breather, examined the direction it was headed, and decided to pull back a bit rather than letting Peter, Jorgen, Klas and Christofer just run absolutely fucking wild, a feat they are capable of at any given moment. Seriously, in terms of raw musicianship, I'd run these guys up against In Flames, At the Gates or Dark Tranquillity and feel quite confident in a huge bet. The level of ability is staggering (no wonder Wildoer recently made it so close to the Dream Theater drum seat); so it's just a matter of whether the songwriting brilliance can match the proficiency on any given day, any given album. Expanding Senses is not quite to the level of excellence of the debut, and very much overshadowed by what would follow (an album I find completely perfectly from its first to last second); but if you can, for 40 minutes, place yourself into its universe of pummeling, dynamic neo-thrash, then it's a positive experience. Also must mention that I loved the cover art on this one much more than the first two. Not sure that the music is quite so surreal or cerebral as what Thomas Ewerhard did there, but it contributes to the whole 'abused in an asylum' aesthetic the band had adopted since the turn of the century.