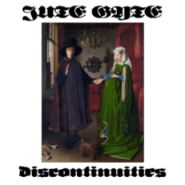 Traditionally, I've not been the sort to ramble on about musical theory when composing reviews. Part of this is that a sizable chunk of readers might not have any idea what I was talking about if I were to count out the 64th notes or harp over the Mixolydian scale for a paragraph. The other is that, being separated from the Music Major since the mid 90s, when I swapped to another out of boredom, more the fault of the particular curriculum and professors than the subject itself, I'm probably rusty and would have to do far more technical research on the exact terminology being thrown around these years. Having said that, when vectoring in on an album like Jute Gyte's latest black metal adventure, Discontinuities, it would be criminal not to at least make mention of the techniques being employed, since they're representative of why the album is so revolutionary in its style.

Kalmbach's music has always been experimental and original in both structure and theme, but this time out, he's shifted over to a customized, 24-tone guitar, exploring microtonal intervals in note phrasing rather than the normalized 12 step semitone. Various other cultures (ancient and modern) have employed the practice before, in particular a number of 19th/20th century composers, but its use in rock music, and by extension extreme metal, is a rarity at best. I had heard a track from a Florida death metal group a while back (Last Sacrament) who were messing with microtonal composition, and while impressive, I felt like a lot of the rhythms did not heavily diverge from the standards of what I'd normally expect. Lo and behold, the guitarist for that band is the very same individual (Ron Sword of Sword guitars) who helped adjust Kalmbach's axe here, and it's a good thing: because through this novelty, Kalmbach has managed to reinvent his pre-installed vision into something even more unnerving and cacophonous. Having long been a fan of unusual, alternate tunings and instrumentation as applied to genre, the very notion of this is a thrill; even if it comes with some escalated trepidation due to my familiarity with just how disturbing Jute Gyte's music can get..

I've probably said it before, but this is basically a one-man Sonic Youth for the post-Burzum generation. The guitars fixated more on the former comparison, the vocals and shared love of ambiance redolent of the latter. This is an album which heavily explores textures. Warped, wonderful textures. From the thundering, droning inaugural progression of  "The Haunting Sense of an Unrepeatable Unidirectional Vector", you can immediately feel the difference in the chords as subtle bass grooves are wrought below them. There is still a propensity for sheer 'wall of noise' amplitude, especially in some of the faster, harder hitting sequences, but these are never given so much face time that they grow to any level of annoyance. Instead, they're measured off against jangling, cleaner passages of dissonant tranquility, and once in awhile he pulls off a truly climactic, otherworldly chord sequence: near the minute mark of the wryly titled "Romanticism is Ultimately Fatal" (best song title this year?) would be one example, or the hustling post-punk clamor opening "Supreme Fiction and the Absolute Fake", which turns out to be perhaps my favorite overall of the metallic tracks.

Ironically, while I often find his instrumental/ambient tracks highlights of his albums, this time around I found the titular "Discontinuities" to be the least remarkable piece among these seven. Instead of synthesizers, this is replete with murky guitar strums that trade the usual distortion for some echo, but though the notes change, and the middle of the album is the perfect placement to give the listener some rest from the surrounding chaos, it simply wasn't as interesting as its neighbors. The production is about even with prior releases. Bass lines are fluid and mesmeric, but obviously simpler than the quarter-tone guitar passages and bright shards of ear stabbing bedlam. Drums are tightly fit and mechanical, but I found myself so drawn to the unusual guitar phrasing that I only paid them cursory attention. Vocals are harrowing and impetuous, unfettered rasping which never seems monotonous or rehearsed; almost like someone experiencing acts of self-mutilation and being captured on a microphone. There is no sense of overly cautious syllabic structure, just deep and disturbing poetry being channeled via the suffering. No, it doesn't lend itself to the conventional, glorious dichotomy of verse/chorus songwriting, but it's fresh and mildly unpredictable (other than the voice).

Discontinuities is symbolic in title, because it does break from the slowly stagnating course of the previous albums, which were themselves pretty damn discordant and distinct. Jute Gyte will remain unlistenable to many, more to their narrow range of aural acceptance than through any fault of the music, but I honestly was surprised that the shift in intonation didn't render the music inhumanly annoying. There's a shocking sense of warmth exuded by even the most frenzied and insect-like polyphonic picking patterns, and though it might not be labyrinthine on a purely technical level, there's a natural complexity that builds while the mind reels and attempts to place the guitars into perspective. Uncomfortable? Of course. But in the clause of 'it if didn't hurt, it wasn't worth it'. Kalmbach continues to traverse genre boundaries as if they were mere hallucinations, and I do hope he continues to incorporate aesthetic divisions, implement nuanced instrumentation, and twist the knobs (and spines of the listeners). Another killer in a largely unbroken line of killers.