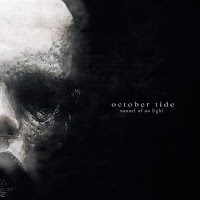 The very existence of Tunnel of No Light proves two things: one, that the band's reunion record (A Thin Shell) after a decade of absence was no petty shell of a comeback, and that the Swedes would continue the mournful melancholy of their output. Two: that this is a niche of doom that seems to grow less compelling each time I hear another album that lacks any sense of innovation or interesting songwriting. It's hardly a carbon copy of the band's other works, but what tweaks have been made are minimal, the riffs only stick about half of the time (where the band's superb debut Rain Without End was nearly flawless), and while it remains a very sad sound, I simply don't feel the immediate impending weight of emotion on me. Whether that stems from the sleek production or the chord progressions, I cannot tell you, but if you've been pining for more in the vein of Gray Dawn or A Thin Shell, at least I can't argue that Fredrik Norrman and October Tide oblige you here.

This is the fourth vocalist in as many albums, with death grunter Alexander Högbom (of Volturyon) stepping into position. I'll give the guy some credit, he does actually try to channel his various predecessors into one cohesive whole that suits the music, from Jonas Renkse's broad gutturals to the raspier tones that followed on the post-Rain Without End material. The qualifications are there, and he's not above a little dynamic range as he floats between the two poles. That said, while professional, I never really found the vocal lines quite so interesting or stunning. The drums are also pretty laid back, standard rock style, and while audible, they just don't match the power level of the rhythm guitars, grunts or near constant melodies that flutter out over the foundation to manifest the essential October Tide atmosphere. Bass is groovy, occasionally gifted with a bit of fuzzier sewage; important since it's often left drifting about a song while the guitarists let ring some slightly grimed, psychedelic and sorrowful strings; but very often lost during the heavier riffs to which it more closely adheres. I found the power chord selections or chugs a little mundane, since they're subjugated to the strength of the melodies, but those into this field of melodic of Gothic doom/death won't find them out of the ordinary or disappointing.

Really, Tunnel of No Light's success comes down to the bare melodic progressions, and here the Swedes are able to just barely prove that they've still got what it takes. It was a wise idea to front load the best of these ("Of Wounds to Come"), but the lilting, rainy sequences are interspersed consistently through the 52 minutes that comprise the album. I found that the material was varied enough between the solemn crush of the heavier moments to the more dreamy segues where the rhythm guitars will disappear to let the bass and cleaner melodies dominate, and there were also a lot of tight, percussive chords that punched the bottom end to create an overcast cadence, rather than just the usual chugging depth on such a disc. Production is very brisk and clean, and I never found even the longer pieces (like "Our Constellation, which nears 9 minutes) to be boring or needlessly repetitive. Ultimately, though, after about four full listens through the material, I did not find it to leave much of a lasting impact. Some decent songs ("Of Wounds to Come", "Watching the Drowners"), but perhaps the melodies just aren't as tantalizing as they were 16 years past on the debut. It never dips below Grey Dawn in quality, and might have some appeal for fans of Rapture, Katatonia, Insomnium, Noumena, and Isole, but I remained rather dry-eyed through each exposure.