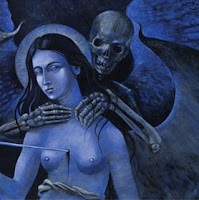 Perhaps not as bizarre or interesting as several of their better known countrymen, but Paris' Aosoth have definitely been refining their palettes for ghastly, death-like black metal for a few years now, culminating in 2011's III: Violence & Variation, to which this latest chapter offers a consistent continuity. In fact, IV: An Arrow in Heart straddles the two genres so closely that I'd have some difficulty in committing it to the one or the other. You've got the raving, growled vocals, the dense and fluid dissonance of the churning chord sequences, but the general speed and blasting and thundering in pieces like "Temple of Knowledge" or the titular track provoke a blacker appeal. Either way, Aosoth are keen on disturbing their listeners, and succeed in doing so yet again.

Imagine if Blut Aus Nord's recent 777 trilogy were to eschew the electronics and the lighter, breezier tones, and pursue the strangling, suffocating atonal chords into a dank, raw sewer of rat corpses and the byproduct of human waste. Then imagine some cult were to take up space in this wretched underbelly and splay the remains of many gruesome sacrifices over the walls and ceiling of this catacomb. In listening through An Arrow in Heart, you are walking through such a claustrophobic, threatening place, wading through viscous decay while trembling in horror. It's not that the walls of chords created by the guitars are necessarily all that evil, but rather the density and purity of the streaming notation, which varies from chilling to warm, robust to fragmented. Almost a blackened spin on the old, repulsive Swedish death metal guitar tone which is still all the rave amongst younger generational acts. Thrust into this some rigid, turbulent drumming, dark bass tones and you've got a sure means by which to ruin a sunshine filled afternoon. Gutter-black. Plague metal.

Aosoth occasionally experiments beyond this, with the pair of "Broken Dialogue" pieces which consist of striving, abysmal ambiance or cleaner guitar strings, but for the most part you're getting a lot of the meaty depth of the blasted drums and ceaseless tirade of chords. There are some stretches, in particular during the longer pieces like "Ritual Marks of Penitence", where the progressions do become dull, and the sheer cavernous swell of the music is not enough to compensate for some commonplace riff writing. The periods of haunted atmosphere, like the break in "Temple of Knowledge" or the interludes, become more welcome by association, but I do wish the guitars had been a little crazier throughout. The vocals also get a little dry in places, not that I don't enjoy the intonation, but it's not always so varied or interesting. Compared to the 2011 album, I didn't come away from An Arrow in Heart quite so torn apart, but if you're interested in more of that saturated, subterranean discomfort, I doubt you'll be disappointed. Also props for Benjamin Vierling's cover artwork, one of the most beautiful I've seen this year.