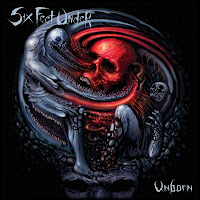 I doubt I was alone in my first impression that Six Feet Under were going to attempt to 'double up' the shock and awe they created with last year's Undead, their first genuinely great album in my opinion. The cover artwork and the title (with its 'un-' prefix) had me thinking that they might have been intended as a double album and simply split down the middle. In terms of production values and general direction, Unborn is indeed a pretty close approximation of its predecessor; only not as good. But let's give some credit to Chris Barnes and company...while it falls short of that stunning surprise, they're not merely trying to copy it. Unborn does try a few new tricks, and these often provide for its better moments, but several of the songs are steeped in the band's past mediocrity, and a lot of the rhythm guitar riffs are very bland indeed.

Gauging the album by its first track alone, "Neuro Osmosis", I thought we were hearing an entirely new entity which had finally discovered the nuance of applying atmosphere to the barebones death & roll. A decent acoustic intro, loads of melodies glazing the rhythm guitars and an almost frightful notation definitely levitate expectations for the remainder of the music. In truth, these melodies and even a few noisy atmospheric leads continue to pop up through the playlist (as in "Psychosis"), but they never stake their ground as a prevalent element in the mix. No, most of the riffs here are pretty threadbare Six Feet Under standards which occupy a middle ground between death, groove metal and even a bit of angry, slammable, chugging NYHC. For instance, "Prophecy" could have appeared on a record by Madball or Hatebreed and few would know the difference. That's not to put it down as a particularly uninteresting piece, but there was something resonant and unmistakably compelling about the chugs and grooves on Undead that had me constantly hitting the repeat key, where only a few of the riff progressions here truly stood out to me.

Examples include those surgical thrash mute fills at the opening of "Psychosis"; the Slayer-esque fill in "Decapitate"; the mid-paced Prong-like thrashing abrasions of "Zombie Blood Curse"; or "The Curse of Ancients", which despite a few vapid note patterns and double bass roll riffs, is overall quite strong. But in other times, you've got a track like "Fragment" which is boring, by-the-numbers death and groove brickwork apart from the little melodies; or "Incision", which occasionally reminds me of the almost wigga death metal hip hop effluvia that chocked up earlier 6FU albums. Nothing is really offensive or awful, but where Undead had these 7-8 incredibly strong, memorable pieces, I can't say that anything here was more than acceptable. In the past, it wouldn't have been possible for me to be 'disappointed' with anything Barnes and crew were putting out, because I had zero expectations even after hearing the Obituary-with-Corpse-vocals debut, but I felt as if Unborn was a little bit of a letdown. Not for lack of trying, and honestly they still seem as if they've turned over a new leaf, but few of the cuts screamed at me to keep revisiting them.

Props that they've maintained a consistent production with the last album. Kevin Talley's drums sound like dynamite blowing out the walls of a virgin mine shaft; in particular his fills, toms and kicks always keep the beats interesting beyond the very simple riffing. The rhythm guitar is enormous, you can feel the chugs in your gut just like Undead, though perhaps the melodies might have been cranked up a notch so they expressed more than an airy, fleeting distance. I kept wanting more of these. Leads are often just dowsed in simple noodling or feedback, but often they'll waltz up or down a scale. Bass lines are clearly present, but they do absolutely nothing interesting in terms of fills or waltzing off the central rhythm progression, so their major contribution is simply to the density. As for Barnes' grunts, he focuses pretty heavily on his higher, snarling pitch in a lot of these tracks, with the guttural being used in a more atmospheric levity. Few of the syllabic lines really grab you by the crotch as they did on the last album, but I wouldn't say his voice was shot. It still sounds like he's got the hack/lung/chops.

In the end, while this wasn't an impressive album and might point towards Undead being a 'fluke' among the Six Feet Under canon, it's still a sturdy improvement over tripe like Bringer of Blood or Warpath, and in fact I'd place it in a dead heat with the debut Haunted as their 'silver medal' record. That's not saying much, but even if I didn't enjoy Unborn, I still felt as if Swanson and Barnes had some fresh ideas to implement here, and I hope this imagination carries through towards future releases. Lightning might not have struck twice here, but the cloud cover is still dark, and you can still feel that static of potential along with the clouds of ganja smoke in the air.