Fleshgrind - The Seeds of Abysmal Torment (2000) 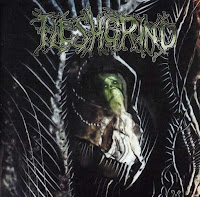 While it wasn't a dramatic improvement, and there was a pervasive reek of 'keeping up with the times' populating the album, The Seeds of Abysmal Torment was a much needed step forward for Chicago's Fleshgrind in three important categories: musicianship, composition, and of course, brutality. The writing was far denser, punishing, and though I wouldn't dub it adventurous, it was clearly exploring more of the latent potential within its constituents. Arguably, the sophomore could have been an entirely other band. The riffing, hostility, and even the vocals aren't quite like Destined for Defilement, but the deviation is not so broad that they couldn't interchange the songs in a set list. No, this is simply a hallmark of growth for the Midwest murderers, and in truth it's the strongest album of their catalog, even if it doesn't quite distinguish itself from its influences and peers.

From the top down, this was a case of evolution into a more tense and busy entity which could compete with a lot of the younger brutal and technical death acts coming out of both the US and Europe. Still very much redolent of Suffocation, but there's also running parallel to American stompers like Internal Bleeding and Dying Fetus. The guitar tone is more textured. Ruddy and pungent, from the grinding progressions to the unusual and interesting breakdowns. It feels both filthy and claustrophobic, but the acrobatic chugging of Steve Murray ensures that there' no shortage of tempo alternation. The drums likewise are more condensed, with the toms and bass drums far more energetic than the debut. Note sequences often shift between low end grooves, pinches and squeals to flights of very surgical sounding death/thrash ("Monarch of Misery", or the wonderfully and aptly titled "Hogtied and Hatefucked") that puts me in the same head space that I was on Pestilence's debut, Malleus Malifecarum. Nowhere near as catchy, mind you, but the very presence of these passages is enough to keep the music from quickly stagnating. The rate of hit to miss guitar riffs is quite higher than Destined for Defilement, though the album is almost equally concise in its overall length.

Bass is still not a dominant force, but it's definitely deeper and contributes more to the overall aesthetic, which in itself is far more low end and slamming amidst the more aerobic guitar work. You can feel it constantly brooding and bumping along in the muscular murk of the percussion. Rich Lipscomb's vocals are also changed: his lower guttural is comparable to the debut album, but he's alternating this with a sustained growl that sounds like a less ghoulish John Tardy; and in addition, there are a lot more petulant little snarls cast into the mix to create a morbid schizophrenia. The pacing is pretty interesting throughout the album, ranging from an all out clusterfuck assault on the listener's senses and sensibilities, to simpler patterns that emerge; thrashing breaks, chunky grooves. Certainly this is an album that serves as another precursor to the vastly saturated, international brutal and slam death scene we know today, and I wouldn't be surprised to find this in the collections of many of the Russian and Indonesian bands who have been churning out such works of late.

Another advancement was in the lyrical material; even the sadistic "Hogtied and Hatefucked" and "A Legion of Illusions" were better managed than most of the comparable tunes on the debut, and in general the messages and imagery here are more matured and better 'arranged'. They didn't just feel like another garden variety Cannibal Corpse knockoff. Obviously the three years between the debut and this, as the band signed to the (largely underwhelming) Olympic Recordings imprint, were well spent in refining their sound. The Seeds of Abysmal Torment might not be a memorable album, but it was headed in that direction, and anyone sporting a hard on for classic 90s Suffocation or Crytopsy's None So Vile might at least want to hit this up once.