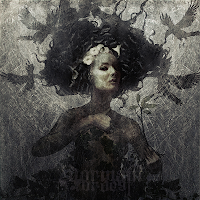 Though it's not the most compelling entrant into the death metal field I've heard of late, Dormant Ordeal's full-length debut has a nasty habit of keeping the listener in line when he or she starts to drop off. As if the music itself were to wrench the listener by the collar and exclaim 'Mother fucker, you WILL pay attention to me!. This is achieved through two things: one, the sheer magnitude of the band's technical abilities, not only in how many riffs they cram together into individual tracks, but also their spry tendency to flip into some mesmeric guitar progression amidst a slew of more average fare that serves as little more than an aggressive confirmation of the band's seasoned speed and brutality. In the end, we're not looking at an incredibly distinctive schoolyard bully here, but it's still the sort you would hand your lunch money if prompted, lest your bones and organs be mashed up into a pulp...

To be truthful, gauging by the song titles and the interesting artwork choice, I was expecting a more surreal and atmospheric sound out of It Rains, It Pours. There are a few gorgeous, simmering ambient pieces that bookend or bisect the experience, in particular the beautiful outro "Depopulation of Earth", but for the most part it's a straight pummeling exercise in dexterity and concussion. Like a lot of their Polish forebears and peers, there is a pretty straight correlation to the Floridian death metal works of a Morbid Angel, Deicide or Malevolent Creation. The vocals, probably the least interesting part for me, were redolent of the Glen Benton tendency towards dual grunting and snarling, assembled together to create a petulant dichotomy. The constant ease with which the drummer manhandles the double bass drums. The tremolo picked patterns are often imbued with a sense of post-modern dissonance, but just as likely to wreak old school havoc. When it works, like the zippy guitar fills coursing through "The Sinless" or the infectious death/thrash muted picking deep in the bridge of "Unimagined, Unwritten, Unseen", it's truly impressive, and there is never any sense that anything from the beats to the leads is less than meticulously refined.

The lyrics, too, are fairly interesting and relevant. From the personal, to the social and political, this is not simply some gore band. Also fairly characteristic of a lot of the Polish scene, who tend to deal with much of their subject matter in a serious tone (even the occult stuff like modern Behemoth). Dormant Ordeal are all around a pretty tight package. The songwriting is generally concise, but they're not afraid to extend out the tracks into which they've assembled more ideas. The riffs are about 50/50 hit or miss, but when they fall into the former category, they're strong enough to rival anywhere in their scene. There is plenty of variation over the 12 tracks that they don't settle themselves too deeply into one padded seat. I think the only downsides were that the 'highs' of It Rains, It Pours were so much better than its lows, like you're getting this brief glimpse of genius and then having it snapped away; and also the vocals, while competent, could use a bit more interesting construction. Maybe drop out the dual harsh vocals and focus in on one more sinister and demented timbre. But that aside, Dormant Ordeal is definitely one to check out if you're into bands like Coldworker, Centaurus-A, or their countrymen Decapitated (first few albums).