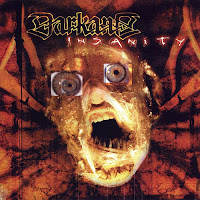 Insanity is another of those albums I've mentally filed away for several years; a general lack of interest in my first few listens when I bought it culminated into an ensuing decade of indifference, broken only by a few occasional attempts to further penetrate its surface. After so rapidly and completely warming up to Rusted Angel, this was somewhat of a letdown, and I still feel the same, but perhaps Insanity is not an album one should write off so quickly, because it's not exactly lacking in the effort department, and the very least follows the footsteps of the debut. Today I greet this disc with an 'enthusiastic neutrality', in part because it introduced us to the band's next vocalist Andreas Sydow, and in part because it has a few buried gems further down the track list.

It's difficult to define exactly what makes the first record so special, and this one sub par, because they are more or less written in the same mold. Kinetic, modern thrash that dispenses the virility and vitality of melodic Swedish death metal over a framework of punching mid to faced paced riffs, chugging grooves, and chorus hooks that border upon accessibility without falling over the edge into that banal New England mall and radio targeted metalcore territory I so loathe. It's certainly not any less 'technical' than Rusted Angel, but there is less of that sense of dystopian, metropolitan waste. The production here is a fraction more straightforward, drier and punchier. Less of that drowned futurism evoked through the distortion, reverb and saturated vocals which permeated the debut with such an unforgettable atmosphere. This and Expanding Senses have more of a looney bin aesthetic coursing through them, as opposed to that overcast metropolitan nightscape which had so attracted me. The core structure is the same in terms of riffing variation and the heavy influence of classical music you can hear through the leads, or the intro and instrumental pieces with their strings and choirs, but most of the guitar progressions here just didn't connect to my emotional receptors as their predecessors.

The guitar tone is certainly decent, and thicker even, but I can't say I loved it as it was charging along unless the band were spiking the palm mutes with some clinical melodic picking. In truth, this is probably even more melodic than Rusted Angel due to the more broadly arranged cleaner vocals sequences as in "Emanation of Fear" where Sydow really draws out the syllables like a Swedish version of Fear Factory. The leads tend towards some reverb and flesh out the 'body' of the tracks, but a lot of them go right in one ear and out the opposite, and ultimately they so rarely manage to thrill solely with the rhythm guitars (critical for thrash as far as I'm concerned). There are a few lions among these lambs, like "Psychic Pain" with its immediately memorable thrash riffing, and a great chorus that wouldn't have been out of place on one of the first few Strapping Young Lad records. "The Perverted Beat" is another choice track, sort of a nice ancestor for the amazing "Secondary Effects" from Layers of Lies, but then neither of these tunes has arrived in the first 20 minutes of Insanity...and the only cut that excited me before that was probably "Third", the first metal piece after the strings, and that only for a few of the opening riffs and a half-decent chorus.

Drums are still quite prevalent in the mix, with crashes cutting straight through the walls of melody erupting through the choruses, and the bass playing is still quite good, with a bit more of a springy depth than Rusted Angel. The real story, of course, is Andreas Sydow, who steps into Lawrence Mackrory's position and attempts to do it some justice. He's certainly more of a focused front man on this record, but it's also a little subdued by comparison to some of his later insanity. I love the inherent passion and melody carried in both his cleans and rasps, but numerous of the intonations here just aren't written at a highly memorable level. The best is when he just goes ripshit, like in the "Third" verse, because even if he's not as impish and frenzied sounding as his predecessor, there's a lot more natural psychosis and menace to his barking. He's easily a fit for the position, and in fact my favorite Darkane vocalist, but this simply wasn't his strongest hour.

And that defines Insanity in a nutshell: acceptable, with a few tunes that rise above the din, but far from the band's best material. As a result, the album really didn't capitalize upon the momentum of Rusted Angel, and Darkane rather quickly transformed from a bright, shooting star to just another hazy glow on the firmament of Swedish extremity. Occasionally a sparkle or two, but you wouldn't use it for guidance if you were lost in the wilderness. Still, if you're a sucker for Soilwork circa A Predator's Portrait or Natural Born Chaos, or SYL's City, or Fear Factory's dichotomy of driving, forceful rhythm guitars and melodic climaxes, it might be something you'd want to check out. I'm not entirely sold on the album even to this day, but if asked five years ago I might have rated lower. It's not bad at all, but it stands alongside Demonic Art as a less inspired outing in an otherwise smashing catalog.