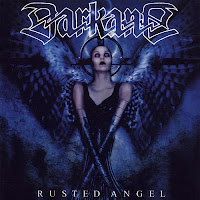 Rusted Angel was an album I initially had some resistance towards, since it dropped at a time in which I was inundated by At the Gates worship here in the local scene. I couldn't walk ten feet to get a Slurpee at the mall without some ear-stretched metalcore teen asking if I'd heard 'this new band At the Gates', and like a lot of harder line metal heads who had survived the 80s and not gone over entirely to grunge and alt rock in the ensuing decade, I was sick of all the Johnny-come-lately wagoneering wiggas getting up in my grill with bands I had already been listening to for much of the decade. In retrospect, I must have felt 'threatened' by the popularity of my coveted Swedish metal, and I'm sure I wasn't the only person. In fact, looking around today at internet reactions and various conversations I've had at gigs, I'm POSITIVE that this is a mentality which seems to persist any time some hot new sound arrives. But the truth is, I was being an ornery, immature, jagged nutsack: At the Gates was a great band, Slaughter of the Soul was a great record, and as it turns out, so was Rusted Angel. Props to another local musician who urged me to reconsider the Darkane debut...else it might have taken me a lot longer to get around to it.

The At the Gates comparison is admittedly marginal here, perhaps even coincidental, because while the schizoid vocals of Lawrence Mackrory occasionally resemble a Lindberg snarl, and I have no question that Darkane benefited greatly from hype generated by the melodeath trinity of AtG, Dark Tranquillity and In Flames, the song structures and individual riffs are far more prescient of a 'future thrash' variety. And this is what ultimately won me over to Rusted Angel: its urbane, bleak and almost mechanical sense of modernity. It's like a group of Swedes took a bunch of their favorite Teutonic and Bay Area thrash records circa '86 to '90 over to a recycling factory, watched them crushed into a cube, and then through some miracle of modern technology, managed to listen to the results on an audio player. But it's even more than that: intersperse some clearly neo-classical influence in the guitar progressions, and interchange Mackrory's petulant rasping with some Burton Bell-esque, melodic choral overtures, and you've got one exhilarating dynamo of a debut that easily surpassed their countrymen Soilwork, who would go on to immediately eclipse this in popularity with their own debut Steelbath Suicide (as an aside, 'Speed' was actually singing with Darkane for a short time). While I do enjoy that other album as a frenetic, youthful and futuristic spin on Slaughter of the Soul, Rusted Angel was the better of the two, and brought far much more to the table...

One thing that will either make this or break this album for many listeners is how willing they are to adapt to its atmosphere. Darkane was not averse to heavily dowsing the guitars and vocals in distortion or effects that lent to its post-modern, nigh on apocalyptic environs, and measured against the athletic drumming of Peter Wildoer and the symphonics used as intros and interludes, it definitely develops this glassy, smoggy sensation of oppression. Like some dark, post-industrial dystopia in decay, hovering at the edge of eternal night, through which cybernetic young roughs wage turf wars, their chieftains howling at one another from occupied skyscrapers of glass and rusting steel as the 'soldiers' go at one another with flak cannons and motorcycle chains. West Side Story meets Shadowrunner. Dark City metal. Enter the Matrix, dudes. A battle on the edge of a tomorrow that may never come. Queue the acid rain. The lightning. At numerous points on the album I can picture Rick Deckard donning his fedora as he gazes apprehensively into the haze of smoking vid screens, neon advertised human organ cloning services, and cyborg dope dealers. Waitin' for Edward Olmos to give him a lift in his origami machine. The imagery this disc conjures truly stokes my cyberpunk-fueled imagination, but I can understand how some might find the thrashing and churning tone of the guitars a little too harsh and mechanical...

It DOES help that Darkane sports one of the best Swedish guitar duos out there, in Klas Ideberg and Christofer Malmström, both fine composers who imbue the low end, chugging thrash momentum with just enough of a harmonic, melodic weave that at no point does it every grow dull. They might not have been performing the most complex, technical death metal out there, but as far as the melodic thrash goes in the 90s, these guys were really at the cutting edge. I love the blistering glazes of wired melodies they evoke into tunes like "Chase for Existence". They introduce a lot of interesting fills at the end of the charging progressions which help enforce the aforementioned 'industrial' aesthetic in the writing, and though they would compose superior leads on future efforts (like Layer of Lies), they were already accomplished shredders here. But really, some of the speed picked thrashing patterns like the intro to "July 1999" simply have to be heard to be believed, and almost all the licks here simply scream 'THRASH IS NOT DEAD' into the electrified mist that drowns them. I won't even get into how brilliant the experimental instrumental "The Arcane Darkness" is... The bassist Jörgen Löfberg is also pretty skilled, managing to anchor the rhythm guitars with a tightly sprung, pumping tone that tirelessly plods on like a sewage sluice.

As great as the musicianship is all around, though, I think most would agree that this is the finest hour of  Lawrence Mackrory among the many records he's either sung or played bass on. The guy is a snarling, murmuring threat that sends the Defcon reeling. Like an impish cyber-successor to the splatter thrash inflection of  Blaine 'Fart' Cook (The Accused), and yet he's still capable of hitting those soaring, climactic chorus parts like over the thundering double bass in "A Wisdoms Breed". I'm not a 'jump da fuc up' sort of guy, at least I haven't been since Everlast was ordering me to do it, but when he hits a chorus like this I feel like entering a pole vault competition. They immediately escalate the aggression to something glorious and catchy without ever bordering on cheesy, and still keeping the atmosphere of the album dirty. What's more, they've actually managed to hire a chorus for pieces like the album intro; a lofty and ambitious move for an unknown death/thrash band on a debut album, wouldn't you say? But it works, this constant clash of both the old and the new, and I'd go beyond that to say it's inspirational. Why wasn't Rusted Angel one of the biggest records of its day? Probably because assholes like me wrote it off for a couple months too many...

I wouldn't call it perfect, and it's not the Swedes' masterpiece. That would come later, with an album that closely resembles this one but truly fleshes out the songwriting. There are a few riffs here or there that just don't inspire as much as their neighbors, and though I love all the manic vocal/axe effects bouncing around, there are moments where the drums will feel a little loud, or the mechanistic post-human atmosphere takes too much priority over the headbanging fervor. It definitely has more 'feeling' to it than fellow Swedes Meshuggah, who had put out a killer record some months prior in Chaosphere, but I feel as if the inherent harshness of Rusted Angel's reality could have used just a handful more of its memorable melodies and chorus climaxes to really balance itself out. That said, this is a pretty killer introduction to one of the better acts to hail from that Swedish explosion of the mid through late 90s, and still holds up rather well as I thrash out to it now. Dense, tense, destructive, dystopian and lyrically depressing, it's the Snow Crash of Swedish death thrash. Pizza delivery in 30 minutes or less, or the delivery guy gets whacked.