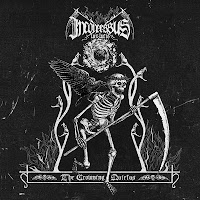 Inconcessus Lux Lucis has been steadily developing a sort of black metal savant status in England the likes of which we've seen from bands in the French scene, which overreach the bounds of that particular genre by threading in other styles that distinguish and enrich the traditional underpinnings. Similar to how a band like Deathspell Omega developed; the riffing and level of sheer dissonance being used by this band is not quite the same, and there is slightly less spastic, controlled chaos over this record, but the multitude of riffs, the willingness to embrace a bit of a death metal aesthetic and some melodic heavy metal riffing alongside its more technical blackened core. I had been highly impressed with their 2014 EP Crux Lupus Corona, and this follow-up by and large thrives on that same level of song-weaving potential.

The only real piece of 'tranquility' you'll find on The Crowning Quietus is its nightmarish intro piece "With Leaden Hooks and Chains", occult voices barking off against a background thud of drums and hellish, developing ambiance. After that it's off to the races, with a black metal rampage of passages which often resemble hyper-black/thrash note structures from the 90s, only with an almost carnival effect, or a mocking sensibility in how the frenzied higher note passages fly across the frets. As you might have guessed, these guys go with a deeper growl than most black metal vocalists, but it's not to the point of being truly guttural, just a deeper, full-bodied rasp. There are always new progressions of riffs being layered in through any given track, so while there aren't many which really stuck to my brain over the long term, they are definitely exciting and interesting to follow, never taking any safe or exceedingly predictable routes, instead more like a representation of madness, fits of which claim the listener as he's exposed to the shitstorm of the rhythm guitars. The rhythm section is likewise damned competent, with busy beats across the spectrum and a nice, throbbing, distorted bass tone which also helps capture a little of the nuclear thrash mood you can feel from some of the riffs.

Three of the songs are longer pieces, but they represent the back half of the album, which is smart because you'll be tossed into the sinister labyrinth like mice, but given a few simpler mazes to navigate before they just lay it all on in the more advanced levels. That said, they help flush out those 7-8 minute tunes with a broader array of atmospherics and varied guitars that avert needless repetition or redundancy. I'm not trying to misidentify Inconcessus Lux Lucis as some cheesy, overly technical outfit, they simply put a lot of effort into the songs, a lot of pattern memorization and make sure there is more to greet the ear than the same old chords and melodies you expect from a lot of midlist black metal even to this day. Song for song, I don't know that this beats the previous EP, but it's more than evident that they can maintain that style of hectic, energetic composition for about twice the length, since The Crowning Quietus is overall a merciful 35 minutes, knowing when to call it off and leave its audience frothing for more. More potential here than almost any other black metal outfit from the UK that I could name without having to think long and hard about it.