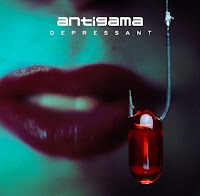 Antigama have always been one of European grind's strongest advocates and ambassadors towards the future, applying slightly more technicality and modernity to a style that often feels as if it's simply composed of too few tricks and variations. Experimenting with chords, atmospheres, and note progressions that aren't so easy to predict in their frenetic presentation, the Polish band manages to somehow find a style to themselves but rarely repeat a lot of the minute details that go into each composition, while never coming close to abandoning the fundamentals that so many listeners will recognize from their early exposure to Napalm Death, Extreme Noise Terror, Terrorizer, Agathocles, and the like.

The Depressant EP hits you straight up with a concept on its cover, a RELEVANT concept, which isn't just mindless political shillery, and then frames it with the sample opening to "Empty Paths", a labyrinthine assault of dissonant guitars and head-spinning blast work adorned in snarls, protracted screams, and yeah guys I gotta mention the drumming a second time in this sentence because it's utterly fucking sick. For a 2-ish minute tune, the band's specialty here on anything but the title cut, they certainly pack in a lot of beating, a lot to think about, and ultimately something more worth revisiting than your average sped-up 4-chord hardcore/punk configuration which has to depend all too much on a charismatic barker. Antigama has the vocals AND everything else in check, with a musical delivery that is for all purposes flawless across the instruments, but never wanky, showy or unapproachable beyond the sheer intensity that this genre unleashes upon your ears.

They also know how to thrive in these post-modern or industrial-feeling elements, through the voice effects or samples or just the odd chords that embellish cuts like the opening of "Room 7" with a loose, jazzy guitar feel. The ambient passages constructed here, like the first minute of "Depressant" itself, or the interesting way they launch the percussion in the finale "Shut Up", make you feel like you're wandering these cold-lit passages of modern living, where each of your steps is guided by debt, family and societal pressures, regrets, guilts. In fact they do such a good job on this element that I wouldn't be opposed to hearing them put out a purely contemporary industrial/ambient record with even smaller flourishes of grinding where they would do the most impact. They've really been on an incline with their prior full-lengths, Meteor nudging past Warning, and The Insolent hitting a new summit, and the material here is no exception, standing roughly even with that latest full-length in breadth and quality, just a slick, interesting and effective 19 minutes of 21st century grind. The blue pill is not even an option here.