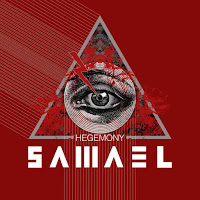 It's evident that the members of Samael and myself seem to agree on the Passage-era being the one most inspiring and interesting to revisit, and Hegemony is perhaps the greatest example of that since that 1996 opus dropped through Century Media. That's not to say I don't also enjoy their earlier, more primitive black metal records or the transitional Ceremony of Opposites, in fact I think those are the more influential by far; yet those machine-driven, poetic paeans to the cosmic which dominated their fourth album are forever my siren call when reaching over to their section of my CD rack. So I cannot at all blame them for attempting to rekindle that particular  style, which they've already done a few times, in particular on the more aggressive Above and its successor Lux Mundi, which for my money was the best Samael album of the 21st century...until now, although I'd argue that Hegemony is far more directly an homage to Passage than its predecessor was.

That's both a good and bad thing, because while Vorphalack and crew are clearly intent on dressing up and expanding those aesthetics, there are numerous moments here where you'll feel as if you're getting deja-vu for a synthesizer or guitar progression, drum pattern or fill that you've already heard two decades ago. For the most part, they're coming up with new chord patterns, which works out really well in a tune like "Red Planet" which is a new take on the warlike space opera of a "Jupiterian Vibe" which will have you marching in similar step. Most of the melody in modern Samael music is provided solely by the synthesizers, which have the same martial, striking, sweeping feel to them here as they cultivate both a militaristic and Eastern sheen. It's up to the beats, lower end guitars and Vorph's distinct, eternally accented snarls to provide the metallic bedrock, and they do so well, with a lore more cutting, kinetic passion to them than you'd hear out of comparable hybrids of industrial and metal aesthetics such as those of the Neue Deutsche Härte persuasion. I also have to praise the bass playing here, from new member Drop, who lays out these awesome, fat, rolling lines that support the clamorous, choppy majesty in tunes like "This World". While the drum programming has long been a point of contention for some fans, I think Xytras does another great job layering in thick enough and 'real enough' percussion pads without abandoning the martial and mechanical coldness.

The lyrics these days continue the themes of social consciousness and social unity that they first embarked on with Eternal, but they're also willing to spark up a little pseudo-controversy with a cut like "Black Supremacy", and if you've seen the video there you'll probably have seen a lot of the responses. Hint: it's not really about what you think it is. There are also some self-referential pieces like their namesake "Samael", or "Angel of Wrath", the former of which is like a giant socialist shout out to celebrate the band's following, and their message. It's a little heavy handed, but not as corny as, say, Reign of Light; and it wouldn't be the first time, since it does fit the band's modernist, corporate or empirical vision and minimalist visual branding which manifests in both the sleek packaging and fattened new logo variant (which I think is an improvement). Samael is just one of a kind, and while I can promise that those who have shunned everything they've released since 1994 will find no end here to pulling out their own hair and seeking sanctuary in the shadow of some inverted cross where no keyboard dares to tread, I readily admit to having enjoyed the hell out of this.

A couple nicks and dents here or there, a few songs not pulling their weight quite as much as others, but they even manage to transform "Helter Skelter" into something of their own, and the bonus track "Storm of Fire" is one of the coolest on the album. They also don't pull back too far on the heavy spectrum, for example "Black Supremacy" would have felt right at home on Above. Hegemony might not ultimately emit the level of timeless material that Passage was built from, but it certain does a fantastic job of capturing its ebullient, storming magnificence.