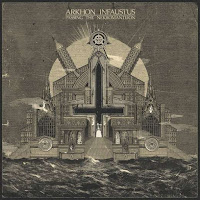 It would have been enough, after an entire decade, to just have any new release from one of the filthiest, most intense French acts I've ever encountered and enjoyed. But beyond that, this latest Arkhon Infaustus EP, Passing the Nekromanteion hits a greater level of maturity and musicianship, without sacrificing the nightmarescapes of blackened death that the Frenchmen had cultivated with killer records like Perdition Insanablis, Filth Catalyst and Orthodoxyn. Though one could trace their own sound to sources like Morbid Angel or Angelcorpse, I've always found that this band's hybrid of extremity was actually ahead of its time, a huge number of popular acts from North America adopting similar styles about a decade after they first hit the scene with material like In Sperma Infernum or Hell Injection, and while they might be slightly overlooked by comparison to countrymen like Deathspell Omega or Blut Aus Nord, I found them just as distinct and formidable an enterprise.

This is a heavily textured, roiling, wall of sound, which paces itself a little less frantically than some of their older albums, but serves as an ideal example of controlled chaos. I'm reminded of Steve Tucker-era Morbid Angel via Gateways to Annihilation, only even more muscular and apocalyptic, as if it had some dystopian industrial sheen to it, with snarls alternated against the guttural vocals and a good breadth of variation. Riffs don't seem terribly stunning individually, but once embedded into the overwhelming force of the tracks, they transform into tightly wound coils of destruction ready to spring into attention with a seconds' notice, lurching and crawling and slithering below the vocals while faint hazes of dissonant atmosphere are created through the interaction of the instruments themselves, with few other adornments needed. When the band hits its faster tempos, the riffing is like a heavier broth of melodic Swedish death and black metal, and the three leading tracks all manage their 7-8 minute durations without lagging into sullen ennui or repetitive boredom, though most of any 'experimentation' is reserved almost exclusively to the 10 minute closer, "Corrupted
Épignosis"...

This is probably the one 'take it or leave it' track here, but I found myself aligning with the former compulsion. It opens with vaulted, droning guitars that are strummed in different distances from the listeners' ears, and then moves forward with a sluggish, doomed pace, lots of feedback or excess notes ringing off into a solemn, bleak environment that eventually erupts with this glaze of melodic doom/death which feels like a bucket of innocents' tears has just been dumped over your head, only to run down over your sinful flesh and evaporate. A really absorbing, intense finale in its own way, even if the audience might not find it balanced off with the other three tracks in terms of excitement that it generates. All around though, the rich, dense production qualities of this EP and the skilled, seasoned aggression of DK Deviant, the original member who handles all the instruments besides the drums (provided by Sylvain 'Skvm' Butet of Temple of Baal and The Order of Apollyon), really drive home the truth that this was one missed band for the last decade, and let's hope they stick around for a few albums longer. Potent stuff well suited to fans who like their black and death metal boiled and hardened into a seamless genre median of depth.